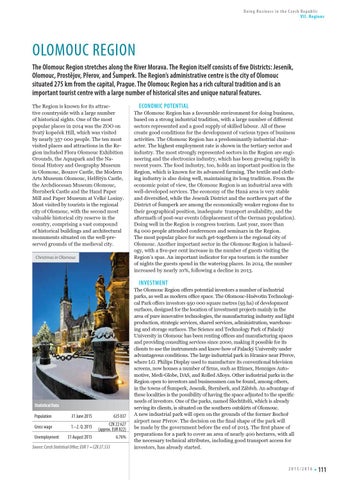 OLOMOUC REGION The Olomouc Region stretches along the River Morava. The Region itself consists of five Districts: Jeseník, Olomouc, Prostějov, Přerov, and Šumperk. The Region’s administrative centre is the city of Olomouc situated 275 km from the capital, Prague. The Olomouc Region has a rich cultural tradition and is an important tourist centre with a large number of historical sites and unique natural features. The Region is known for its attractive countryside with a large number of historical sights. One of the most popular places in 2014 was the ZOO on Svatý kopeček Hill, which was visited by nearly 357 000 people. The ten most visited places and attractions in the Region included Flora Olomouc Exhibition Grounds, the Aquapark and the National History and Geography Museum in Olomouc, Bouzov Castle, the Modern Arts Museum Olomouc, Helfštýn Castle, the Archdiocesan Museum Olomouc, Šternberk Castle and the Hand Paper Mill and Paper Museum at Velké Losiny. Most visited by tourists is the regional city of Olomouc, with the second most valuable historical city reserve in the country, comprising a vast compound of historical buildings and architectural monuments situated on the well-preserved grounds of the medieval city. Christmas in Olomouc

ECONOMIC POTENTIAL The Olomouc Region has a favourable environment for doing business, based on a strong industrial tradition, with a large number of different sectors represented and a good supply of skilled labour. All of these create good conditions for the development of various types of business activities. The Olomouc Region has a predominantly industrial character. The highest employment rate is shown in the tertiary sector and industry. The most strongly represented sectors in the Region are engineering and the electronics industry, which has been growing rapidly in recent years. The food industry, too, holds an important position in the Region, which is known for its advanced farming. The textile and clothing industry is also doing well, maintaining its long tradition. From the economic point of view, the Olomouc Region is an industrial area with well-developed services. The economy of the Haná area is very stable and diversiﬁed, while the Jeseník District and the northern part of the District of Šumperk are among the economically weaker regions due to their geographical position, inadequate transport availability, and the aftermath of post-war events (displacement of the German population). Doing well in the Region is congress tourism. Last year, more than 84 000 people attended conferences and seminars in the Region. The most popular place for such get-togethers is the regional city of Olomouc. Another important sector in the Olomouc Region is balneology, with a ﬁve-per cent increase in the number of guests visiting the Region’s spas. An important indicator for spa tourism is the number of nights the guests spend in the watering places. In 2014, the number increased by nearly 10%, following a decline in 2013.

The Olomouc Region offers potential investors a number of industrial parks, as well as modern ofﬁce space. The Olomouc-Hněvotín Technological Park offers investors 950 000 square metres (95 ha) of development surfaces, designed for the location of investment projects mainly in the area of pure innovative technologies, the manufacturing industry and light production, strategic services, shared services, administration, warehousing and storage surfaces. The Science and Technology Park of Palacký University in Olomouc has been renting ofﬁces and manufacturing spaces and providing consulting services since 2000, making it possible for its clients to use the instruments and know-how of Palacký University under advantageous conditions. The large industrial park in Hranice near Přerov, where LG. Philips Display used to manufacture its conventional television screens, now houses a number of ﬁrms, such as Etimex, Henniges Automotive, Medi-Globe, DAS, and Rolled Alloys. Other industrial parks in the Region open to investors and businessmen can be found, among others, in the towns of Šumperk, Jeseník, Šternberk, and Zábřeh. An advantage of these localities is the possibility of having the space adjusted to the speciﬁc needs of investors. One of the parks, named Šlechtitelů, which is already serving its clients, is situated on the southern outskirts of Olomouc. A new industrial park will open on the grounds of the former Bochoř airport near Přerov. The decision on the ﬁnal shape of the park will be made by the government before the end of 2015. The ﬁrst phase of preparations for a park to cover an area of nearly 400 hectares, with all the necessary technical attributes, including good transport access for investors, has already started.