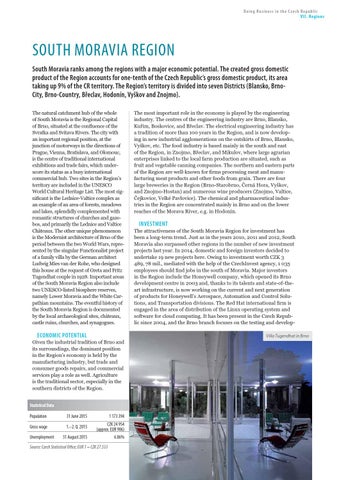 SOUTH MORAVIA REGION South Moravia ranks among the regions with a major economic potential. The created gross domestic product of the Region accounts for one-tenth of the Czech Republic’s gross domestic product, its area taking up 9% of the CR territory. The Region’s territory is divided into seven Districts (Blansko, BrnoCity, Brno-Country, Břeclav, Hodonín, Vyškov and Znojmo). The natural catchment hub of the whole of South Moravia is the Regional Capital of Brno, situated at the conﬂuence of the Svratka and Svitava Rivers. The city with an important regional position, at the junction of motorways in the directions of Prague, Vienna, Bratislava, and Olomouc, is the centre of traditional international exhibitions and trade fairs, which underscore its status as a busy international commercial hub. Two sites in the Region’s territory are included in the UNESCO World Cultural Heritage List. The most signiﬁcant is the Lednice-Valtice complex as an example of an area of forests, meadows and lakes, splendidly complemented with romantic structures of churches and gazebos, and primarily the Lednice and Valtice Châteaux. The other unique phenomenon is the Modernist architecture of Brno of the period between the two World Wars, represented by the singular Functionalist project of a family villa by the German architect Ludwig Mies van der Rohe, who designed this house at the request of Greta and Fritz Tugendhat couple in 1928. Important areas of the South Moravia Region also include two UNESCO-listed biosphere reserves, namely Lower Moravia and the White Carpathian mountains. The eventful history of the South Moravia Region is documented by the local archaeological sites, châteaux, castle ruins, churches, and synagogues.

INVESTMENT The attractiveness of the South Moravia Region for investment has been a long-term trend. Just as in the years 2010, 2011 and 2012, South Moravia also surpassed other regions in the number of new investment projects last year. In 2014, domestic and foreign investors decided to undertake 19 new projects here. Owing to investment worth CZK 3 489, 78 mil., mediated with the help of the CzechInvest agency, 1 035 employees should ﬁnd jobs in the south of Moravia. Major investors in the Region include the Honeywell company, which opened its Brno development centre in 2003 and, thanks to its talents and state-of-theart infrastructure, is now working on the current and next generation of products for Honeywell’s Aerospace, Automation and Control Solutions, and Transportation divisions. The Red Hat international ﬁrm is engaged in the area of distribution of the Linux operating system and software for cloud computing. It has been present in the Czech Republic since 2004, and the Brno branch focuses on the testing and developVilla Tugendhat in Brno

Given the industrial tradition of Brno and its surroundings, the dominant position in the Region’s economy is held by the manufacturing industry, but trade and consumer goods repairs, and commercial services play a role as well. Agriculture is the traditional sector, especially in the southern districts of the Region.

The most important role in the economy is played by the engineering industry. The centres of the engineering industry are Brno, Blansko, Kuřim, Boskovice, and Břeclav. The electrical engineering industry has a tradition of more than 100 years in the Region, and is now developing in new industrial agglomerations on the outskirts of Brno, Blansko, Vyškov, etc. The food industry is based mainly in the south and east of the Region, in Znojmo, Břeclav, and Mikulov, where large agrarian enterprises linked to the local farm production are situated, such as fruit and vegetable canning companies. The northern and eastern parts of the Region are well-known for ﬁrms processing meat and manufacturing meat products and other foods from grain. There are four large breweries in the Region (Brno-Starobrno, Černá Hora, Vyškov, and Znojmo-Hostan) and numerous wine producers (Znojmo, Valtice, Čejkovice, Velké Pavlovice). The chemical and pharmaceutical industries in the Region are concentrated mainly in Brno and on the lower reaches of the Morava River, e.g. in Hodonín.