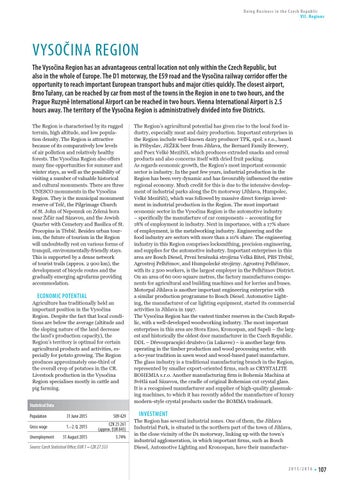 VYSOČINA REGION The Vysočina Region has an advantageous central location not only within the Czech Republic, but also in the whole of Europe. The D1 motorway, the E59 road and the Vysočina railway corridor offer the opportunity to reach important European transport hubs and major cities quickly. The closest airport, Brno Tuřany, can be reached by car from most of the towns in the Region in one to two hours, and the Prague Ruzyně International Airport can be reached in two hours. Vienna International Airport is 2.5 hours away. The territory of the Vysočina Region is administratively divided into five Districts. The Region is characterised by its rugged terrain, high altitude, and low population density. The Region is attractive because of its comparatively low levels of air pollution and relatively healthy forests. The Vysočina Region also offers many ﬁne opportunities for summer and winter stays, as well as the possibility of visiting a number of valuable historical and cultural monuments. There are three UNESCO monuments in the Vysočina Region. They is the municipal monument reserve of Telč, the Pilgrimage Church of St. John of Nepomuk on Zelená hora near Žďár nad Sázavou, and the Jewish Quarter with Cemetery and Basilica of St. Procopius in Třebíč. Besides urban tourism, the future of tourism in the Region will undoubtedly rest on various forms of tranquil, environmentally-friendly stays. This is supported by a dense network of tourist trails (approx. 2 900 km), the development of bicycle routes and the gradually emerging agrofarms providing accommodation.

ECONOMIC POTENTIAL Agriculture has traditionally held an important position in the Vysočina Region. Despite the fact that local conditions are below the average (altitude and the sloping nature of the land decrease the land’s production capacity), the Region’s territory is optimal for certain agricultural products and activities, especially for potato growing. The Region produces approximately one-third of the overall crop of potatoes in the CR. Livestock production in the Vysočina Region specialises mostly in cattle and pig farming. Statistical Data Population

The Region’s agricultural potential has given rise to the local food industry, especially meat and dairy production. Important enterprises in the Region include well-known dairy producer TPK, spol. s r.o., based in Přibyslav, JEŽEK beer from Jihlava, the Bernard Family Brewery, and Poex Velké Meziříčí, which produces extruded snacks and cereal products and also concerns itself with dried fruit packing. As regards economic growth, the Region’s most important economic sector is industry. In the past few years, industrial production in the Region has been very dynamic and has favourably inﬂuenced the entire regional economy. Much credit for this is due to the intensive development of industrial parks along the D1 motorway (Jihlava, Humpolec, Velké Meziříčí), which was followed by massive direct foreign investment in industrial production in the Region. The most important economic sector in the Vysočina Region is the automotive industry – speciﬁcally the manufacture of car components – accounting for 18% of employment in industry. Next in importance, with a 17% share of employment, is the metalworking industry. Engineering and the food industry are sectors with more than a 10% share. The engineering industry in this Region comprises locksmithing, precision engineering, and supplies for the automotive industry. Important enterprises in this area are Bosch Diesel, První brněnská strojírna Velká Bíteš, PBS Třebíč, Agrostroj Pelhřimov, and Humpolecké strojírny. Agrostroj Pelhřimov, with its 2 500 workers, is the largest employer in the Pelhřimov District. On an area of 60 000 square metres, the factory manufactures components for agricultural and building machines and for lorries and buses. Motorpal Jihlava is another important engineering enterprise with a similar production programme to Bosch Diesel. Automotive Lighting, the manufacturer of car lighting equipment, started its commercial activities in Jihlava in 1997. The Vysočina Region has the vastest timber reserves in the Czech Republic, with a well-developed woodworking industry. The most important enterprises in this area are Stora Enso, Kronospan, and Sapeli – the largest and historically the oldest door manufacturer in the Czech Republic. DDL – Dřevozpracující družstvo (in Lukavec) – is another large ﬁrm operating in the timber production and wood processing sector, with a 60-year tradition in sawn wood and wood-based panel manufacture. The glass industry is a traditional manufacturing branch in the Region, represented by smaller export-oriented ﬁrms, such as CRYSTALITE BOHEMIA s.r.o. Another manufacturing ﬁrm is Bohemia Machina at Světlá nad Sázavou, the cradle of original Bohemian cut crystal glass. It is a recognised manufacturer and supplier of high-quality glassmaking machines, to which it has recently added the manufacture of luxury modern-style crystal products under the BOMMA trademark.

INVESTMENT The Region has several industrial zones. One of them, the Jihlava Industrial Park, is situated in the northern part of the town of Jihlava, in the close vicinity of the D1 motorway, linking up with the town’s industrial agglomeration, in which important ﬁrms, such as Bosch Diesel, Automotive Lighting and Kronospan, have their manufactur-