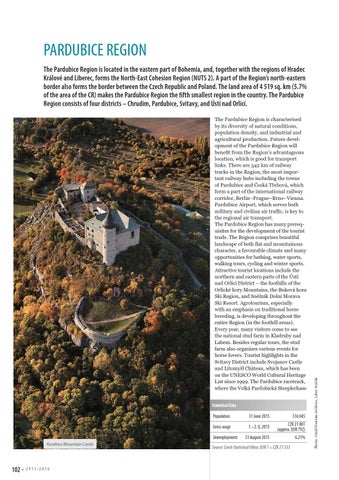 The Pardubice Region is characterised by its diversity of natural conditions, population density, and industrial and agricultural production. Future development of the Pardubice Region will beneﬁt from the Region’s advantageous location, which is good for transport links. There are 542 km of railway tracks in the Region, the most important railway hubs including the towns of Pardubice and Česká Třebová, which form a part of the international railway corridor, Berlin–Prague–Brno–Vienna. Pardubice Airport, which serves both military and civilian air trafﬁc, is key to the regional air transport. The Pardubice Region has many prerequisites for the development of the tourist trade. The Region comprises beautiful landscape of both ﬂat and mountainous character, a favourable climate and many opportunities for bathing, water sports, walking tours, cycling and winter sports. Attractive tourist locations include the northern and eastern parts of the Ústí nad Orlicí District – the foothills of the Orlické hory Mountains, the Buková hora Ski Region, and Sněžník Dolní Morava Ski Resort. Agrotourism, especially with an emphasis on traditional horse breeding, is developing throughout the entire Region (in the foothill areas). Every year, many visitors come to see the national stud farm in Kladruby nad Labem. Besides regular tours, the stud farm also organises various events for horse lovers. Tourist highlights in the Svitavy District include Svojanov Castle and Litomyšl Château, which has been on the UNESCO World Cultural Heritage List since 1999. The Pardubice racetrack, where the Velká Pardubická Steeplechase Statistical Data Population Gross wage Unemployment Kunětice Mountain Castle

The Pardubice Region is located in the eastern part of Bohemia, and, together with the regions of Hradec Králové and Liberec, forms the North-East Cohesion Region (NUTS 2). A part of the Region’s north-eastern border also forms the border between the Czech Republic and Poland. The land area of 4 519 sq. km (5.7% of the area of the CR) makes the Pardubice Region the fifth smallest region in the country. The Pardubice Region consists of four districts – Chrudim, Pardubice, Svitavy, and Ústí nad Orlicí.