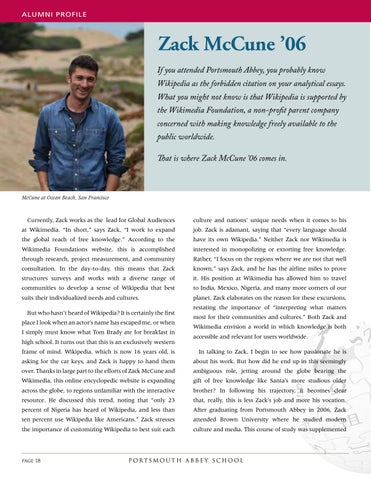 Zack McCune ’06 If you attended Portsmouth Abbey, you probably know

Wikipedia as the forbidden citation on your analytical essays.

What you might not know is that Wikipedia is supported by the Wikimedia Foundation, a non-profit parent company concerned with making knowledge freely available to the public worldwide.

That is where Zack McCune ’06 comes in.

Currently, Zack works as the lead for Global Audiences

culture and nations’ unique needs when it comes to his

at Wikimedia. “In short,” says Zack, “I work to expand

job. Zack is adamant, saying that “every language should

the global reach of free knowledge.” According to the

have its own Wikipedia.” Neither Zack nor Wikimedia is

through research, project measurement, and community

Rather, “I focus on the regions where we are not that well

consultation. In the day-to-day, this means that Zack

known,” says Zack, and he has the airline miles to prove

structures surveys and works with a diverse range of

it. His position at Wikimedia has allowed him to travel

communities to develop a sense of Wikipedia that best

to India, Mexico, Nigeria, and many more corners of our

suits their individualized needs and cultures.

planet. Zack elaborates on the reason for these excursions,

But who hasn’t heard of Wikipedia? It is certainly the first place I look when an actor’s name has escaped me, or when I simply must know what Tom Brady ate for breakfast in high school. It turns out that this is an exclusively western

restating the importance of “interpreting what matters most for their communities and cultures.” Both Zack and Wikimedia envision a world in which knowledge is both accessible and relevant for users worldwide.

frame of mind. Wikipedia, which is now 16 years old, is

In talking to Zack, I begin to see how passionate he is

asking for the car keys, and Zack is happy to hand them

about his work. But how did he end up in this seemingly

over. Thanks in large part to the efforts of Zack McCune and

ambiguous role, jetting around the globe bearing the

across the globe, to regions unfamiliar with the interactive

brother? In following his trajectory, it becomes clear

resource. He discussed this trend, noting that “only 23

that, really, this is less Zack’s job and more his vocation.

percent of Nigeria has heard of Wikipedia, and less than

After graduating from Portsmouth Abbey in 2006, Zack

the importance of customizing Wikipedia to best suit each

culture and media. This course of study was supplemented 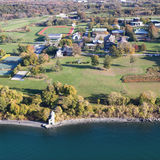