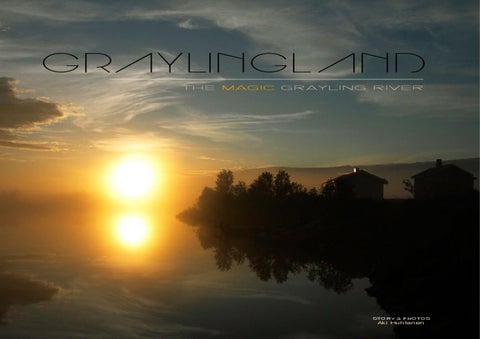 Graylingl and THE MAGIC GRAYLING RIVER

I have been fishing grayling in Northern Scandinavia for more than 20 years. During my fishing career I have visited many wonderful grayling rivers, but compared to any other river the Magic River is unique. In the northernmost reaches of Lapland, thereâ&amp;#x20AC;&amp;#x2122;s a river where the grayling grow really big. Every year dozens of grayling over 1 kg (2.2 lbs), the largest ones exceeding even 2 kg (4.4 lbs) in weight, are caught there.

The source of the river is located in the high fell range. The elevation of the primary headwater lake of the river is more than 600 meters above sea level. The river runs far away from any settlement, so it is a genuine wilderness river. Distance to the nearest road is about 35 - 40 km. This is the main reason why this river hasnâ&amp;#x20AC;&amp;#x2122;t been overfished and consequently the grayling have been able to attain trophy size. We have been naming the rapids of the river as 2100, 1930, 1850, 1800, 1780 etc. not by the length of the rapids, but by the weight (in grammes) of the largest grayling we have caught there.

Some information about the forgetten lake: The lake is located in the high fell range. The elevation is over 500 meters above sea level. The lake location is far away from any settlement, so it is a genuine wilderness lake. Distance to the nearest road is about 40 km. This is the main reason why there has not been fishermans in the lake, and, consequently, the grayling have been able to attain trophy size.

As the summer is short in North Scandinavia (tundra), fishing season in the river lasts only about 100 days. Prime season is usually from late June to mid July. Occasionally, catches are good also in August and early September. Weather conditions can vary greatly. In some years, it has been raining wet snow in late June. On the other hand, the temperature was above 25 ºC in late June last summer. At the end of June the normal water temperature is 15-17 ºC, but last summer the weather was hot and water temperature was unusually high, increasing up to 21.3 ºC during the warmest days. The best fishing time for grayling is from late morning to evening, regardless of whether it’s sunny or cloudy. Despite the effort, however, we haven’t been able to catch any grayling in the small hours or early morning.

In this magnificent river, the growth of grayling does not cease after the first spawning, which usually takes place at the age of five years and a length of 30 cm (12â&amp;#x20AC;?) of these fish. Instead, they grow well until they reach 10 years of age, after which the growth begins to slow down gradually.

Most of the large grayling we have caught have taken a dry fly. Adult sedge imitations have worked best, above all the ‘Ivalonmattilainen’, designed by my friend and fishing buddy Kari Kujala. This fly has fooled dozens of grayling over 1 kg, the biggest weighing exactly 2 kg. And this fly has turned out to work very well in other clear watered rivers in Lapland. Though designed for grayling, the fly suits brown trout and whitefish fishing, too. So far, the biggest whitefish caught on the ‘Ivalon mattilainen’ weighed 1.960 kg (4.32 lbs).

I hope you have enjoyed this photo essay from Aki the guy’s from Graylingland as much as I have. And I must admit that I’m really curious about this place, and one day I have to check these huge Graylings out up there in the “land of the thousand lakes”. I want to thank you Aki for sharing this photo essay from “the forgotten river”, You certainly have put Grayling fishing in a whole new perspective........

A mini e-mag about Graylingland and the amazing fly fishing for huge graylings in Northern Finland. 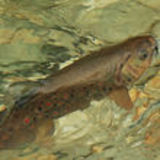