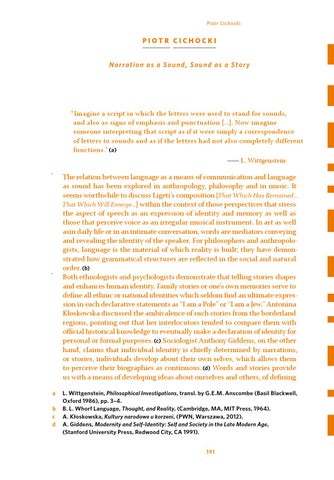 “Imagine a script in which the letters were used to stand for sounds, and also as signs of emphasis and punctuation […]. Now imagine someone interpreting that script as if it were simply a correspondence of letters to sounds and as if the letters had not also completely different functions.” (a) —— L. Wittgenstein

The relation between language as a means of communication and language as sound has been explored in anthropology, philosophy and in music. It seems worthwhile to discuss Ligeti’s composition [That Which Has Remained… That Which Will Emerge…] within the context of those perspectives that stress the aspect of speech as an expression of identity and memory as well as those that perceive voice as an irregular musical instrument. In art as well asin daily life or in an intimate conversation, words are mediators conveying and revealing the identity of the speaker. For philosophers and anthropologists, language is the material of which reality is built; they have demonstrated how grammatical structures are reflected in the social and natural order. (b) � Both ethnologists and psychologists demonstrate that telling stories shapes and enhances human identity. Family stories or one’s own memories serve to define all ethnic or national identities which seldom find an ultimate expression in such declarative statements as “I am a Pole” or “I am a Jew.” Antonina Kłoskowska discussed the ambivalence of such stories from the borderland regions, pointing out that her interlocutors tended to compare them with official historical knowledge to eventually make a declaration of identity for personal or formal purposes. (c) Sociologist Anthony Giddens, on the other hand, claims that individual identity is chiefly determined by narrations, or stories, individuals develop about their own selves, which allows them to perceive their biographies as continuous. (d) Words and stories provide us with a means of developing ideas about ourselves and others, of defining L. Wittgenstein, Philosophical Investigations, transl. by G.E.M. Anscombe (Basil Blackwell, Oxford 1986), pp. 3–4. b B. L. Whorf Language, Thought, and Reality, (Cambridge, MA, MIT Press, 1964). c A. Kłoskowska, Kultury narodowe u korzeni, (PWN, Warszawa, 2012). d A. Giddens, Modernity and Self-Identity: Self and Society in the Late Modern Age, (Stanford University Press, Redwood City, CA 1991). a 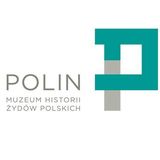 POLIN Museum of the History of Polish Jews
Go explore