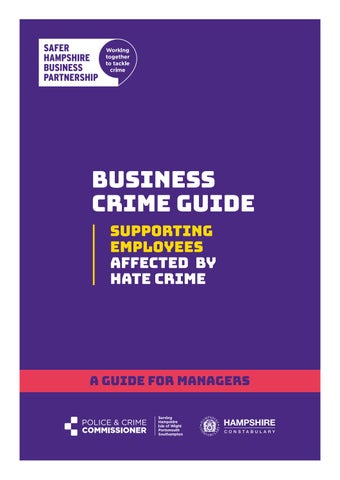 A GUIDE FOR MANAGERS

What is a hate crime?

Information for line managers and those investigating a hate crime concern

Any crime lowers the quality of life for a victim, but a hate crime attacks a personâ&amp;#x20AC;&amp;#x2122;s core sense of identity and belonging within society. Hate crime victims have higher levels of depression, stress and anger, and for longer than victims of other types of crime. The effects on an individual being targeted because of their personal characteristic should not be underestimated. The purpose of this guide is to offer practical support for line managers in the case of a member of their staff becoming a victim of or witnessing a hate crime or a hate incident. Supporting the victim or witness in their efforts to not only report the incident to the police, but also help them deal with it in the work place, can be crucial for their wellbeing. This guide gives useful tips on how to deal with reports of hate crime in the workplace, and where additional help and support can be found locally and nationally.

WHAT IS A HATE CRIME? Hate crime A hate crime is “any criminal offence which is perceived by the victim or any other person, to be motivated by hostility or prejudice based on a personal characteristic, specifically actual or perceived race, religion/faith, sexual orientation, disability and gender identity”. • • • • •

A hate crime can manifest itself as:

Hate incident In England and Wales the police also monitor hate incidents. This could include: not allowing someone to enter a club because of their colour; laughing at homophobic jokes; refusing to let someone with a disability sit next to you. Just because a crime has not been committed does not mean the behaviour is acceptable. The police still record and investigate hate incidents. Many hate incidents can turn into hate crime. For example, bullying can become the criminal offence of harassment.

An incident is treated as a hate crime or hate incident if the victim or any other person perceives it to be.

Hate-based crime and incidents are underpinned by underlying negative attitudes, prejudices and stereotypes, which exist within individuals and society. These attitudes have to be addressed, challenged and tackled to prevent escalation of behaviours into serious crimes.

Why does hate crime exist?

Feeling isolated and vulnerable Feeling as though your self-respect has been taken from you Protecting yourself, but finding yourself on the wrong side of the law Loss of faith in the police and criminal justice system Feeling like retaliating, but fearing reprisals A break-down in family relationships Finding it difficult to cope Having a sense of despair Finding that nobody believes you Feeling hated by others Feeling afraid to let your children out Feeling afraid to go out and staying in Suffering from emotional / mental stress Hating your home and wanting to move Being overcome by panic or anxiety

If victims of hate crime do not report it, government agencies and policy makers will not know the extent of the problem in order to take important steps through legislation, etc, to eliminate it. Hate crime is committed by people who do not care who suffers and to what extent. If they go unchallenged, they will continue to put others in danger. Report it so they can be caught before others suffer.

Information for line managers and those investigating a hate crime concern Managers should take all reasonable steps to protect employees from discrimination and harassment, including from outside sources such as service users, customers and contractors. All employees have the right to: • Work in safe and healthy conditions • Not to be threatened, harassed or bullied • Not to be discriminated against • To be treated fairly and considerately in the workplace • Complain about poor treatment without being victimised Additionally, any employee who is accused of any form of discrimination as defined by the Equalities Act 2010 must be dealt with fairly – including a reasonable investigation and, if needed, a fair disciplinary process.

Employees who have been a victim of a hate crime or incident can be very badly shaken by the experience and may need support from a colleague, friend, internal and external support services as well as potentially needing time off work to recover from the incident. Grievances about a hate crime concern could be raised by way of informally notifying you of an incident; a formal concern being raised as part of the organisation’s grievance procedure (either by the person at whom the behaviour was directed, or a witness to this behaviour); a member of staff or line manager noticing behaviour that concerns them; a client, customer or supplier; or through behaviour that you witness. Ideally concerns should be made in writing with details of the basis of the complaint and with factual information about the incident, however it is recognised that experiencing or witnessing discrimination can be particularly stressful and emotive and it may not be the person who the behaviour was directed at who is offended. Discrimination situations are often very individual and what may or may not be felt to be discriminatory can change over time, and from person to person. It is important to be respectful and empathetic to the employee who raised the complaint and to investigate the matter thoroughly and to be tactful when looking for evidence that supports or undermines the grievance. Employees who raise a grievance will wish to be advised of the likely time scale for the investigation and when they are likely to be notified of any outcomes. The nature and extent of any investigation will depend on the seriousness of the allegations and potential outcome if they are found to be accurate. It is important to keep good records of the process undertaken, especially as the employee who raised the grievance could appeal the decision or take the matter to an employment tribunal if they do not believe their grievance has been resolved adequately.

Records need to be clear and accurate. The information should be factual and include details of the allegation; location and time of the incident(s); who was involved and possible causes; effect on the individuals involved; witnesses spoken to and statements obtained; evidence gathered; the outcome of the investigation and any followon actions. Information and a template for recording the evidence gathered in an investigation can be found at: www.acas.org.uk Direct comments need to be in quotation marks, however it is also important to capture the effect the behaviour had on the complainant and person that the behaviour was directed at (if these are different).

Confidentiality Managers have a duty of confidentiality to their employees. When an allegation of a hate crime is received, the managersâ&amp;#x20AC;&amp;#x2122; commitment to confidentiality should be made clear. As there will usually be a need to retain investigation reports for a period of time, the report should be stored securely and access should only be given to those individuals who need this and in line with data protection and any other relevant legal requirements. If an individual wishes to see a report they believe they have been named in please contact your HR department. They have a right to view this documentation; however, they are not allowed to see any private information of other individuals.

Reporting Anyone who has been a victim of or witnessed a hate crime occurring whilst in the course of their employment should in the first instance refer to any policy and/or procedure; however, in the absence of these they should speak to their line manager or HR team. Anyone who feels unable to report the matter to their employer can report it either to the police or a third party reporting centre.

Reporting to the police In emergencies, call the police on 999. The non-emergency number for your police force is 101, and most police forces now have an online reporting option.

Third Party Reporting Centres (TPRCs) Not all victims are comfortable with reporting their experiences directly to the police. The reasons for this may include the following: • • • • • •

Victims find visiting police stations intimidating or daunting Victims think the police won’t believe them or take them seriously Individuals are unaware they are victims of hate crimes Victims are not aware of alternative ways to report hate crimes Lack of support to help victims make a report, e.g. interpreters Victims fear being outed in terms of their sexuality or disability

Local TPRCs Partnership working has led to the setting up of more than 60 TPRCs across Hampshire and the Isle of Wight. TPRCs provide an alternative way to report a hate crime, better inform the public about such incidents, give confidential advice, help you report it, and support you along the way. You can remain anonymous if you wish, and you don’t need to have contact with the police if you don’t want to. For a list of Third Party Reporting Centres in Hampshire and the Isle of Wight, visit: www.hampshire-pcc.gov.uk/hatecrime For TPRCs in other areas, please contact your local Police and Crime Commissioner.

National TPRCs You can also report hate crime via one of the national independent reporting sites without revealing your personal details. An up-to-date list is available on the Police and Crime Commissioner’s website: www.hampshire-pcc.gov.uk

SUPPORT Victim Care Service The Victim Care Service (provided by Victim Support) is a free service that provides support for victims of crime to cope with, and recover from, the harmful effects of the crime they have experienced. The service is available to all victims aged four years and up – it does not matter: • • • •

• Practical Support – for example the provision of alarms, signposting or referrals to other organisations and advice relating to Criminal Injuries and Compensation Authority claims • Emotional Support – talking about experiences with a trained supporter and working in partnership to develop ways to increase confidence or self-esteem. • Intensive Support – for victims of more serious crimes, such as sexual violence and domestic abuse, the most vulnerable victims and those that have been persistently targeted, intensive support is available. To find out how the Victim Care Service could help you, call 0808 178 1641 (open Monday to Saturday, from 8am to 8pm) or visit: www.hampshireiowvictimcare.co.uk

This guide has been produced with the support of the following organisations:

By the Office of Police and Crime Commissioner for Hampshire and Hampshire Constabulary. Designed to support managers supporting employees affected by Hate Crime. 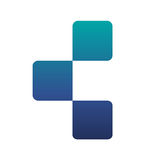