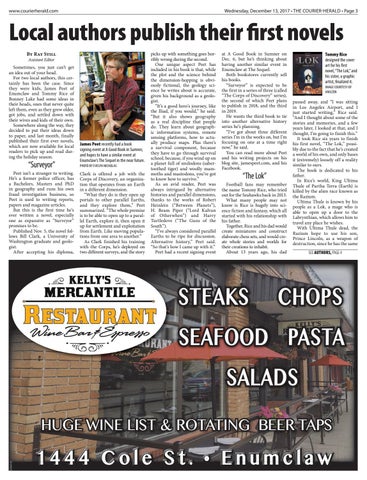 Sometimes, you just can’t get an idea out of your head. For two local authors, this certainly has been the case. Since they were kids, James Peet of Enumclaw and Tommy Rice of Bonney Lake had some ideas in their heads, ones that never quite left them, even as they grew older, got jobs, and settled down with their wives and kids of their own. Somewhere along the way, they decided to put their ideas down to paper, and last month, finally published their first ever novels, which are now available for local readers to pick up and read during the holiday season.

Peet isn’t a stranger to writing. He’s a former police officer, has a Bachelors, Masters and PhD in geography and runs his own fraud investigation business, so Peet is used to writing reports, papers and magazine articles. But this is the first time he’s ever written a novel, especially one as expansive as “Surveyor” promises to be. Published Nov. 5, the novel follows Bill Clark, a University of Washington graduate and geologist. After accepting his diploma,

James Peet recently had a book signing event at A Good Book in Sumner, and hopes to have a similar event at Enumclaw’s The Sequel in the near future. PHOTO BY EVELYN NICHOLAS

Clark is offered a job with the Corps of Discovery, an organization that operates from an Earth in a different dimension. “What they do is they open up portals to other parallel Earths, and they explore them,” Peet summarized. “The whole premise is to be able to open up to a parallel Earth, explore it, then open it up for settlement and exploitation from Earth. Like moving populations from one area to another.” As Clark finished his training with the Corps, he’s deployed on two different surveys, and the story

picks up with something goes horribly wrong during the second. One unique aspect Peet has included in his book is that, while the plot and the science behind the dimension-hopping is obviously fictional, the geology science he writes about is accurate, given his background as a geologist. “It’s a good hero’s journey, like the Iliad, if you would,” he said. “But it also shows geography as a real discipline that people do. They learn about geographic information systems, remote sensing platforms, how to actually produce maps. Plus there’s a survival component, because they have to go through survival school, because, if you wind up on a planet full of smilodons (sabertoothed tiger) and woolly mammoths and mastodons, you’ve got to know how to survive.” As an avid reader, Peet was always intrigued by alternative histories and parallel dimensions, thanks to the works of Robert Heinlein (“Between Planets”), H. Beam Piper (“Lord Kalvan of Otherwhen”) and Harry Turtledove (“The Guns of the South”). “I’ve always considered parallel Earths to be ripe for discussion. Alternative history,” Peet said. “So that’s how I came up with it.” Peet had a recent signing event

at A Good Book in Sumner on Dec. 6, but he’s thinking about having another similar event in Enumclaw at The Sequel. Both bookstores currently sell his books. “Surveyor” is expected to be the first in a series of three (called “The Corps of Discovery” series), the second of which Peet plans to publish in 2018, and the third in 2019. He wants the third book to tie into another alternative history series he’s planning. “I’ve got about three different series I’m in the works on, but I’m focusing on one at a time right now,” he said. You can read more about Peet and his writing projects on his blog site, jamespeet.com, and his Facebook.

Football fans may remember the name Tommy Rice, who tried out for the Seahawks back in 2013. What many people may not know is Rice is hugely into science fiction and fantasy, which all started with his relationship with his father. Together, Rice and his dad would create miniatures and construct elaborate chess sets, and would create whole stories and worlds for their creations to inhabit. About 13 years ago, his dad

Tommy Rice designed the cover art for his first novel, “The Lok,” and his sister, a graphic artist, finalized it. IMAGE COURTESY OF AMAZON

passed away, and “I was sitting in Los Angeles Airport, and I just started writing,” Rice said. “And I thought about some of the stories and memories, and a few years later, I looked at that, and I thought, I’m going to finish this.” It took Rice six years to finish his first novel, “The Lok,” possibly due to the fact that he’s created a world of his own, and only bases it (extremely) loosely off a reality similar to ours. The book is dedicated to his father. In Rice’s world, King Ultima Thule of Partha Terra (Earth) is killed by the alien race known as the Razium. Ultima Thule is known by his people as a Lok, a mage who is able to open up a door to the Labrynthian, which allows him to travel any place he wishes. With Ultima Thule dead, the Razium hope to use his son, Prince Lincoln, as a weapon of destruction, since he has the same

December 13, 2017 edition of the Enumclaw Courier-Herald

December 13, 2017 edition of the Enumclaw Courier-Herald