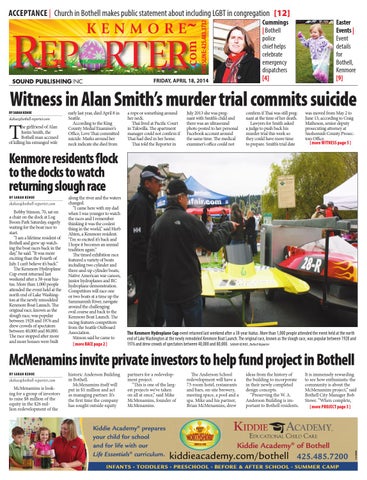 he girlfriend of Alan Justin Smith, the Bothell man accused of killing his estranged wife

a rope or something around her neck. Thai lived at Pacific Court in Tukwilla. The apartment manager could not confirm if Thai had died in her home. Thai told the Reporter in

July 2013 she was pregnant with Smith’s child and there was an ultrasound photo posted to her personal Facebook account around the same time. The medical examiner’s office could not

confirm if Thai was still pregnant at the time of her death. Lawyers for Smith asked a judge to push back his murder trial this week so they could have more time to prepare. Smith’s trial date

was moved from May 2 to June 13, according to Craig Matheson, senior deputy prosecuting attorney at Snohomish County Prosectors Office. [ more WITNESS page 5 ]

Bobby Stinson, 70, sat on a chair on the dock at Log Boom Park Saturday, eagerly waiting for the boat race to start. “I am a lifetime resident of Bothell and grew up watching the boat races back in the day,” he said. “It was more exciting than the Fourth of July. I can’t believe it’s back.” The Kenmore Hydroplane Cup event returned last weekend after a 38-year hiatus. More than 1,000 people attended the event held at the north end of Lake Washington at the newly remodeled Kenmore Boat Launch. The original race, known as the slough race, was popular between 1928 and 1976 and drew crowds of spectators between 40,000 and 80,000. The race stopped after more and more houses were built

along the river and the waters changed. “I came here with my dad when I was younger to watch the races and I remember thinking it was the coolest thing in the world,” said Herb Ahten, a Kenmore resident. “I’m so excited it’s back and I hope it becomes an annual tradition again.” The timed exhibition race featured a variety of boats including two cylinder and three-and-up cylinder boats, Native American war canoes, junior hydroplanes and RC hydroplane demonstration. Competitors will race one or two boats at a time up the Sammamish River, navigate around the challenging oval course and back to the Kenmore Boat Launch. The racing features competitors from the Seattle Outboard Association. Stinson said he came to [ more RACE page 2 ]

The Kenmore Hydroplane Cup event returned last weekend after a 38-year hiatus. More than 1,000 people attended the event held at the north end of Lake Washington at the newly remodeled Kenmore Boat Launch. The original race, known as the slough race, was popular between 1928 and 1976 and drew crowds of spectators between 40,000 and 80,000. SARAH KEHOE, Bothell Reporter

historic Anderson Building in Bothell. McMenamins itself will put in $1 million and act as managing partner. It’s the first time the company has sought outside equity

partners for a redevelopment project. “This is one of the largest projects we’ve taken on all at once,” said Mike McMenamins, founder of McMenamins.

The Anderson School redevelopment will have a 73-room hotel, restaurants and bars, on-site brewery, meeting space, a pool and a spa. Mike and his partner, Brian McMenamins, drew

ideas from the history of the building to incorporate in their newly completed design concepts. “Preserving the W. A. Anderson Building is important to Bothell residents.

It is immensely rewarding to see how enthusiastic the community is about the McMenamins project,” said Bothell City Manager Bob Stowe. “When complete, [ more PROJECT page 3 ]

April 18, 2014 edition of the Bothell/Kenmore Reporter

April 18, 2014 edition of the Bothell/Kenmore Reporter