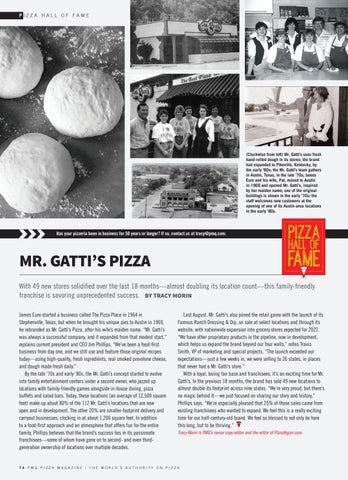 (Clockwise from left) Mr. Gatti’s uses fresh hand-rolled dough in its stores; the brand had expanded to Pikeville, Kentucky, by the early ’80s; the Mr. Gatti’s team gathers in Austin, Texas, in the late ’70s; James Eure and his wife, Pat, moved to Austin in 1969 and opened Mr. Gatti’s, inspired by her maiden name; one of the original buildings is shown in the early ’70s; the staff welcomes new customers at the opening of one of its Austin-area locations in the early ’80s.

Has your pizzeria been in business for 50 years or longer? If so, contact us at tracy@pmq.com.

MR. GATTI’S PIZZA With 49 new stores solidified over the last 18 months—almost doubling its location count—this family-friendly franchise is savoring unprecedented success. BY TRACY MORIN James Eure started a business called The Pizza Place in 1964 in Stephenville, Texas, but when he brought his unique pies to Austin in 1969, he rebranded as Mr. Gatti’s Pizza, after his wife’s maiden name. “Mr. Gatti’s was always a successful company, and it expanded from that modest start,” explains current president and CEO Jim Phillips. “We’ve been a food-first business from day one, and we still use and feature those original recipes today—using high-quality, fresh ingredients, real smoked provolone cheese, and dough made fresh daily.” By the late ’70s and early ’80s, the Mr. Gatti’s concept started to evolve into family entertainment centers under a second owner, who jazzed up locations with family-friendly games alongside in-house dining, pizza buffets and salad bars. Today, these locations (an average of 12,500 square feet) make up about 80% of the 112 Mr. Gatti’s locations that are now open and in development. The other 20% are smaller-footprint delivery and carryout businesses, clocking in at about 1,200 square feet. In addition to a food-first approach and an atmosphere that offers fun for the entire family, Phillips believes that the brand’s success lies in its passionate franchisees—some of whom have gone on to second- and even thirdgeneration ownership of locations over multiple decades.

Last August, Mr. Gatti’s also joined the retail game with the launch of its Famous Ranch Dressing &amp; Dip, on sale at select locations and through its website, with nationwide expansion into grocery stores expected for 2022. “We have other proprietary products in the pipeline, now in development, which helps us expand the brand beyond our four walls,” notes Travis Smith, VP of marketing and special projects. “The launch exceeded our expectations—just a few weeks in, we were selling to 26 states, in places that never had a Mr. Gatti’s store.” With a loyal, loving fan base and franchisees, it’s an exciting time for Mr. Gatti’s. In the previous 18 months, the brand has sold 49 new locations to almost double its footprint across nine states. “We’re very proud, but there’s no magic behind it—we just focused on sharing our story and history,” Phillips says. “We’re especially pleased that 25% of those sales came from existing franchisees who wanted to expand. We feel this is a really exciting time for our half-century-old brand. We feel so blessed to not only be here this long, but to be thriving.” Tracy Morin is PMQ’s senior copy editor and the editor of PizzaVegan.com. 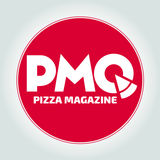