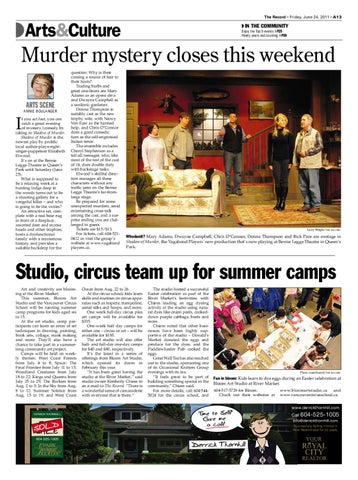 f you act fast, you can catch a great evening of mystery/comedy by taking in Shadow of Murder. Shadow of Murder is the newest play by prolific local author-playwrightsinger-puppeteer Elizabeth Elwood. It’s on at the Bernie Legge Theatre in Queen’s Park until Saturday (June 25). What is supposed to be a relaxing week at a hunting lodge deep in the woods turns out to be a shooting gallery for a vengeful killer – and who is going to be the victim? An attractive set, complete with a real bear rug in front of a fireplace, assorted deer and moose heads and other trophies, hosts a dysfunctional family with a mysterious history, and provides a suitable backdrop for the

question: Why is their coming a source of fear to their hosts? Trading barbs and great one-liners are Mary Adams as an opera diva and Dwayne Campbell as a sardonic gardener. Donna Thompson is suitably cast as the new trophy wife, with Nancy Von Euw as the harried help, and Chris O’Connor does a good comedic turn as the self-engrossed Italian tenor. The ensemble includes Cheryl Stephenson as a tell-all teenager, who, like most of the rest of the cast of 14, does double duty with backstage tasks. Elwood’s skillful direction manages all these characters without any traffic jams on the Bernie Legge Theatre’s far-fromlarge stage. Be prepared for some unexpected murders, amid entertaining cross-talk among the cast, and a surprise ending you are challenged to guess. Tickets are $15/$13. For tickets, call 604-5210412 or visit the group’s website at www.vagabond players.ca.

Art and creativity are blooming at the River Market. This summer, Bloom Art Studio and the Vancouver Circus School will be running summer camp programs for kids aged six to 15. At the art studio, camp participants can learn an array of art techniques in drawing, painting, book arts, collage, mask making and more. They’ll also have a chance to take part in a summerlong community art project. Camps will be held on weekly themes: West Coast Forests from July 4 to 8; Space: The Final Frontier from July 11 to 15; Woodland Creatures from July 18 to 22; Kings and Queens from July 25 to 29; The Rockies from Aug. 2 to 5; In the Sky from Aug. 8 to 12; Summer Solstice from Aug. 15 to 19; and West Coast

Ocean from Aug. 22 to 26. At the circus school, kids learn skills and routines on circus apparatus such as trapeze, trampoline, aerial silks and hoops, and more. One week full-day circus plus art camps will be available for $335. One-week half day camps for either one – circus or art – will be available for $185. The art studio will also offer half- and full-day one-day camps for $40 and $80, respectively. It’s the latest in a series of offerings from Bloom Art Studio, which opened its doors in February this year. “It has been great having the studio at the River Market,” said studio owner Kimberly Chiem in an e-mail to The Record. “There is a wonderful sense of camaraderie with everyone that is there.”

The studio hosted a successful Easter celebration as part of the River Market’s festivities, with Chiem leading an egg dyeing activity at the studio using natural dyes like onion peels, cookeddown purple cabbage, beets and more. Chiem noted that other businesses have been highly supportive of the studio – Donald’s Market donated the eggs and produce for the dyes, and the Paddlewheeler Pub cooked the eggs. Great Wall Tea has also reached out to the studio, sponsoring one of its Occasional Knitters Group evenings with its tea. “It feels great to be part of building something special in the community,” Chiem said. For more details, call 604-5445024 for the circus school, and

Fun in bloom: Kids learn to dye eggs during an Easter celebration at Bloom Art Studio at River Market. 604-517-5729 for Bloom. Check out their websites at