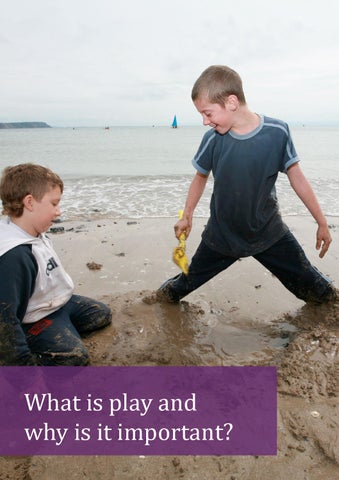 Much has been written about play. It is generally agreed that it is one of the most complex activities we engage in. In this information sheet we endeavour to draw together the most widely respected statements on play to provide a rounded and comprehensive analysis. What is play? Play is a spontaneous and active process in which thinking, feeling and doing can flourish; when we play we are freed to be inventive and creative. In play, everything is possible with reality often disregarded and imagination and free-flow thinking taking precedence1. Play is a highly creative process, using body and mind; it is flexible and often free from externally imposed goals (although children often make these up themselves). Play is important to all children no matter what their impairments or behaviour. Play can be deeply satisfying. The pleasure and excitement of playing, the intensity and concentration, the freedom to experiment, to explore and to create, to find out how things and people work and what we can do with them, to give the imagination free rein, and to fill the gap between reality and desire, all derive from the fact that in play we are in charge. Although play can be a serious as well as a joyous activity, the crucial condition is that errors do not have serious consequences. So, as children play within a familiar setting it is a different kind of experience from unprotected exploration of an unfamiliar and potentially frightening world. Play can only take place within a safe boundary, providing time, space and permission, so that children know where play begins, ‘and where it ends and the rules change back to everyday life’2.

For young children the boundary of their ‘playground’ is provided by parents or other adults who protect them from intrusion from the outside world. This may involve a certain place, usually with familiar features or objects, or a specific time, or both. When two or more children are playing together, or an adult is joining in as a player, they will normally indicate to one another that, ‘This is play’, by giving a look, a ‘play face’, a laugh or perhaps a verbal cue such as, ‘You pretend to be my mummy’. Play can be seen as puzzling because the interaction between players is real, but the message between them is that what they are doing is not real3. For example, a child may take a delight in playing ‘mother’ whilst her real mother has to play the baby. Play is children’s means of assimilating the world, making sense of their experience to make it part of themselves. The opposite process is called ‘accommodation’ in which children are learning to fit in with the demands of reality4. The importance and excitement of play lies in its ability to link the real world and the inner mental world of the child. Making sense of the world is an enormous task for young children. They are constantly at risk of being overwhelmed by events or feelings. By re-enacting and repeating events, and by playing out their own feelings and fantasies, children come to terms with them and achieve a sense of mastery. They can safely express anger and aggression without

harming other people, or without it rebounding to harm them. When anxiety is relieved and inner harmony is restored the child becomes ready to cope with events. In most cases, the development of children’s play follows a predictable pattern and is linked to aspects of physical, intellectual, social and emotional development.

Why play is important Playing is central to children’s physical, mental, social and emotional health and wellbeing. Through play, children develop resilience and flexibility, contributing to physical and emotional wellbeing. For children themselves playing is one of the most important aspects of their lives. Play is what children and young people do. Play is a biological drive. It has little or nothing to do with adults – in fact some adult intervention can seriously damage the process.

The Welsh Government recognises the importance of play in children’s lives and states in its national Play Policy: ‘Play is so critically important to all children in the development of their physical, social, mental, emotional and creative skills that society should seek every opportunity to support it and create an environment that fosters it. Decision making at all levels of government should include a consideration of the impact of those decisions, on children’s opportunities to play.’5 Internationally, the importance of play is also recognised and enshrined in the United Nations Convention on the Rights of the Child (UNCRC). Article 31 of the UNCRC states that the child has the right to play and to join in other recreational activities. As an indication of the significance the United Nations places on children’s play it has published a General Comment on Article 31. This is an official statement that elaborates on the meaning of an

aspect of the UNCRC that requires further interpretation or emphasis. The aim of a General Comment is to raise the importance of an Article and increase accountability among countries that have signed the Convention. In the General Comment the UN states: ‘Play and recreation are essential to the health and well-being of children and promote the development of creativity, imagination, self-confidence, selfefficacy, as well as physical, social, cognitive and emotional strength and skills. They contribute to all aspects of learning; they are a form of participation in everyday life and are of intrinsic value to the child, purely in terms of the enjoyment and pleasure they afford … Play and recreation facilitate children’s capacities to negotiate, regain emotional balance, resolve conflicts and make decisions. Through their involvement in play and recreation, children learn by doing; they explore and experience the world around them; experiment with new ideas, roles and experiences and in so doing, learn to understand and construct their social position within the world.’6

Brain development and deprivation In The Ambiguity of Play Sutton-Smith cites Huttenlocher’s work on brain imaging, implying that children under the age of 10 have at least twice the potential brain capacity of adults7. This overcapacity is linked to human evolution because it enables the brain to retain what he calls ‘its potential variability’. Sutton-Smith suggests that this over-capacity will be used more effectively if children are exposed to diversity of experience through playing. He argues that if children play, their brains will grow larger than they otherwise would, therefore dramatically improving their capacity to store and process information.

If this huge neuronal overcapacity is not taken up by the age of around 10, it will die off. This suggests that play is implicated in children’s brain development, and in evolution itself. It follows that a play deprived future will have serious consequences. Huttenmoser et al refer to what they describe as ‘battery children’ and attribute play deprivation symptoms to: ‘A lack of play resulting from traffic and parental fears of predatory adults, battery children are then often aggressive and whine a lot. By the age of five they are emotionally and socially repressed, find it difficult to mix, fall behind with school work and are at much greater risk of obesity.’8 Note: for more information about play deprivation, read our Play deprivation: impact, consequences and the potential of playwork information sheet written by Professor Fraser Brown.

Behavioural modes Play is a complex phenomenon that is responsive to each individual’s needs. Some theorists have defined play as behaviour that is freely chosen, personally directed and intrinsically motivated8, while others say this is too simple a definition for a very complex process. Freely chosen Ideally, the term free choice means exactly that. In reality, however, it is taken to mean as free as is practicable given the constraints of the safety of the child.

Personally directed Play is a process of trial and error and many valuable ideas and pieces of information are acquired. ‘Short cutting’ this process, for example telling a child the ‘right way’ to hold a hammer or a paint brush, will deny children many of these ‘first hand’ ideas and information. Wherever possible, children should be in control of ‘how’ they play. Intrinsically motivated This term means that play is performed for no external goal or reward.

UNCRC (2013) General Comment No. 17 (2013) on the right of the child to rest, leisure, play, recreational activities, cultural life and the arts (article 31). CRC/C/GC/17: United Nations Committee on the Rights of the Child.

Hughes, B. (1984) Play a Definition by Synthesis in Recommendations on Training in Playwork. London: JNCTP (1985). 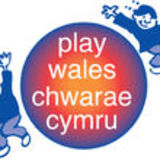