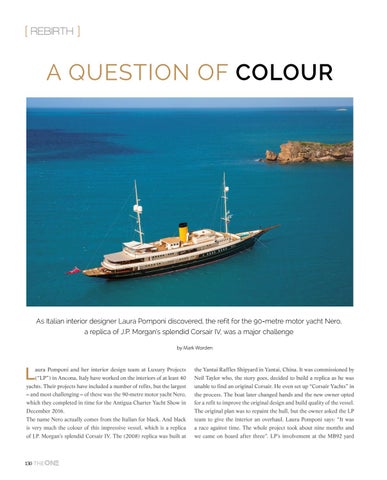 A QUESTION OF COLOUR

As Italian interior designer Laura Pomponi discovered, the refit for the 90-metre motor yacht Nero, a replica of J.P. Morgan’s splendid Corsair IV, was a major challenge by Mark Worden

aura Pomponi and her interior design team at Luxury Projects

the Yantai Raffles Shipyard in Yantai, China. It was commissioned by

(“LP”) in Ancona, Italy have worked on the interiors of at least 40

Neil Taylor who, the story goes, decided to build a replica as he was

yachts. Their projects have included a number of refits, but the largest

unable to find an original Corsair. He even set up “Corsair Yachts” in

– and most challenging – of these was the 90-metre motor yacht Nero,

the process. The boat later changed hands and the new owner opted

for a refit to improve the original design and build quality of the vessel.

The original plan was to repaint the hull, but the owner asked the LP

The name Nero actually comes from the Italian for black. And black

team to give the interior an overhaul. Laura Pomponi says: “It was

is very much the colour of this impressive vessel, which is a replica

a race against time. The whole project took about nine months and

we came on board after three”. LP’s involvement at the MB92 yard 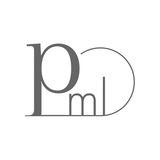