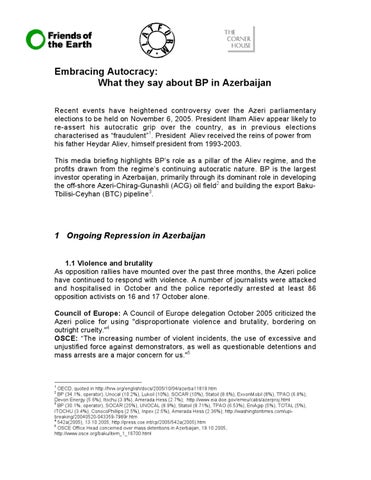 Embracing Autocracy: What they say about BP in Azerbaijan Recent events have heightened controversy over the Azeri parliamentary elections to be held on November 6, 2005. President Ilham Aliev appear likely to re-assert his autocratic grip over the country, as in previous elections characterised as “fraudulent”1. President Aliev received the reins of power from his father Heydar Aliev, himself president from 1993-2003. This media briefing highlights BP’s role as a pillar of the Aliev regime, and the profits drawn from the regime’s continuing autocratic nature. BP is the largest investor operating in Azerbaijan, primarily through its dominant role in developing the off-shore Azeri-Chirag-Gunashli (ACG) oil field2 and building the export BakuTbilisi-Ceyhan (BTC) pipeline3.

1 Ongoing Repression in Azerbaijan 1.1 Violence and brutality As opposition rallies have mounted over the past three months, the Azeri police have continued to respond with violence. A number of journalists were attacked and hospitalised in October and the police reportedly arrested at least 86 opposition activists on 16 and 17 October alone. Council of Europe: A Council of Europe delegation October 2005 criticized the Azeri police for using &quot;disproportionate violence and brutality, bordering on outright cruelty.&quot;4 OSCE: &quot;The increasing number of violent incidents, the use of excessive and unjustified force against demonstrators, as well as questionable detentions and mass arrests are a major concern for us.&quot;5

1.2 Electoral Fraud and Failure The October 2003 Presidential election was condemned as “fraudulent” by the OSCE. Human Rights Watch documented police torture of detainees, including the use of beating, electric shock and threats of rape.”6 The lead-up to the November 2005 Parliamentary elections has caused numerous bodies to again highlight intimidation and coercion. Freedom House: “The Azeri authorities are demonstrating a troubling pattern of denial of rights, which suggests that there is insufficient political will to carry out fair and representative elections.”7 Human Rights Watch: “The Azerbaijani authorities are creating an environment of intimidation that flies in the face of the idea of free and fair elections.” 8 Human Rights Watch: “The high level of unemployment and poverty – and especially the high rate of public sector employment—makes the population particularly vulnerable to government pressures. Threats of dismissal from work and other unofficial economic sanctions are enough to ensure the loyalty of many to the government.”9 1.3 Creeping militarization A humiliating war with Armenia in the early 1990s led to a leaky ceasefire signed in 1994. 20% of Azerbaijan’s pre-war territory was occupied by Armenia and over 800,000 refugees dislocated. Rhetoric remains virulent as Azerbaijan demands the return of its symbolic Nagorno-Karabakh region. Defence Minister of Azerbaijan Safar Abiyev: &quot;The increase of the defence expenditures by Azerbaijan is tied in the first line to the Armenian continuation of arms race.” Abiyev was “stressing that the armed forces of Azerbaijan must be ready to liberate the occupied lands at any necessary moment.”10 MEP Chris Tannock (Cons): &quot;I regret the huge rise in military expenditure in the region and threats of escalation and a fresh outbreak of hostilities.&quot;11 1.4 Corruption and Poverty Azerbaijan scores a shocking 1.9 from 10 on Transparency International corruption rating, coming 140th from 145 countries.12 The 49% of the population living below the poverty line are the hardest hit.13 6

Council of Europe: &quot;With the prospect of enormous revenues flowing into the country from the Baku-Tbilisi-Ceyhan pipeline, and in an environment of widespread corruption, the stakes with regard to power and money are very high – and so are the risks of them being defended at any price.&quot; 14 MEP Baroness Sarah Ludford (Lib): &quot;The Azeri people are being robbed of their future already, as oil wealth and corruption enrich a few while the rest stay impoverished.”15

2 BP as pillar of the Aliev regime 2.1 Revenue flows reinforce autocracy As the largest foreign investor (&gt;$20bn) and provider of vital western expertise for the oil industry, BP is the central pillar of Azerbaijan’s economy.16 Oksan Bayulgen, University of Connecticut: “As the Azerbaijan case demonstrates, in authoritarian regimes, success in attracting foreign capital has a “reinforcing effect” on the political regime. Authoritarian leaders solidify their hold on power by allying themselves with foreign investors. […] In Azerbaijan, the holdover elites from the communist era acquired the right to set the rules of the game for international oil contracts, and in that way attracted the active support of foreign capital in further concentrating their power. […] Thus, the ratification of each PSA [Production Sharing Agreement] allowed the government to increase its leverage over the society.”17 Mubariz Gurban, an official in the governing New Azerbaijan Party: “A revolution cannot take place in Azerbaijan as happened in Ukraine or Georgia. Why? Azerbaijan has oil! Revolutions do not happen in oil states!”18 2.2 BP’s power within Azerbaijan Over the past ten years, BP has made itself the most powerful corporation in Azerbaijan, with enormous power over government and business decisions.

The Economist: “The BTC pipeline and the oil wells are seen by some as making David Woodward, BP&#39;s local boss, the country&#39;s second most powerful man, after President Ilham Aliev.” “For much of the 18th century the managers of the mighty East India Company were also said to be the de facto rulers of chunks of the Indian subcontinent. These days, perhaps the only foreign organisation with so big a say in the affairs of the countries that host it is the American armed forces. But according to some observers in Baku, British Petroleum (BP) has almost the same status in Azerbaijan, a Caucasian petro-state on the western shore of the Caspian Sea.”19 Financial Times: “Depending on who you ask, David Woodward is the third, or at worst, fourth most important man in Azerbaijan. […] BP, the global energy company that has done more than any other to explore and exploit the country’s offshore oil reserves.”20 2.3 Putting Aliev in Western ‘good books’ With coups a likely occurrence in Azerbaijan, the Aliev regime was desperate for strong international allies. BP’s commercial interests and the demand for oil have pulled Western governments into closer relationships with the Azeri government International Crisis Group: “By giving the West a huge stake in hydrocarbon development, Aliev ensured his government of extensive Western capital and diplomatic backing.”21 MEP Baroness Sarah Ludford (Lib): &quot;Foreign criticism of the 2003 presidential elections and 2004 local elections, which were deeply flawed, was inexcusably muted. […] There has been a temptation for the West - Europe and the United States - to stress continuity and so-called stability. They have an eye on the oil, the new Baku-Tbilisi-Ceyhan pipeline having been opened last May by British Petroleum Chairman Lord Browne.&quot;22 David I Hoffman, Cambridge Energy Research Associates: “[Heydar] Aliev was extremely keen to secure both strong international allies to fortify himself against internal and external enemies, and a ready source of hard currency for the reeling Azerbaijani economy. The signing of massive, multi-decade offshore contracts with the BP-Amoco-led AIOC consortium […] helped to intertwine foreign commercial interests with the country’s fate, while simultaneously pulling major western governments into a closer strategic embrace with Azerbaijan.”23

3 BP’s profits from autocracy 3.1 Favourable contracts and minimal oversight The lack of civil society oversight over oil contracts or implementation procedures have provided BP with favourable contracts and lax regulation. Oksan Bayulgen, University of Connecticut: “The situation can be thought of as a “one-stop shopping” for investors who have easy and direct access to a few concentrated elites. […] According to at least one foreign oil company, the absence of strong and relatively autonomous state institutions in Azerbaijan has been seen as a blessing for foreign investors. During negotiation and implementation of contracts, foreign investors feel no pressure to defend their intentions to opposition parties or interest groups. […] As long as they have access to these few elites, their interests will be protected.”24 David I Hoffman, Cambridge Energy Research Associates: “The overriding political favouritism undergirding SOCAR’s position also minimizes bureaucratic interference at the higher levels of the government, thus helping oil projects sidestep many potential administrative pitfalls and delays. […] Environmental and labour laws, for example, can prove elastic.”25 3.2 Stability and political certainty Although it is unlikely that a different government would break the contracts signed, the continuity of the Aliev regime assures BP of its profits. The Economist: “Each time the government of one of the participating countries has changed, says Mr Woodward [CEO of BP Azerbaijan], the new one had to be re-educated. […] Sceptics of big oil&#39;s motives might expect BP&#39;s only political goal in Azerbaijan to be stability, even if, under President Aliev, that sometimes involves the sort of nastiness evident when a demonstration was violently dispersed just before the pipeline ceremony.”26 Financial Times: “It will be 20 years before BP has pumped enough oil to gain sufficient return on its investment. To be sure of securing its revenues, the company needs, above all, political certainty.”27

3.3 Restrictions on criticism Despite Azerbaijan having numerous civil society organisations, a combination of intimidation and financial relationships limit debate and critical inquiry into oil industry behaviour. Mayis Gulaliyev, Centre for Civic Initiatives: Although Azerbaijan has several private newspapers and television stations, Mr Gulaliyev argues that these have become dependent on or intimidated by BP. Several journalists told me of agreements where financial support from BP depends on articles critical of the BTC pipeline being blocked”28 Human Rights House Network: “Azerbaijani authorities had refused to sanction the rally [May 21] of three major opposition parties citing concerns that it fell too close to the day on which the government schedules an inauguration ceremony for the US-supported Baku-Tbilisi-Ceyhan (BTC) major oil export pipeline, an event due to be attended by many foreign dignitaries from 30 countries on 25 May.”29 Human Rights Watch: A coalition of opposition parties (later to become the Azadliq bloc) decided to hold a rally on May 21, 2005. The authorities refused permission for the rally on the grounds that it would be held too close to the May 25 official opening ceremony for the Baku-Tbilisi-Ceyhan (BTC) oil pipeline. When opposition members attempted to go ahead with the peaceful rally, police brutally beat and detained dozens of participants.30

What they say about BP in Azerbaijan 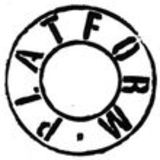