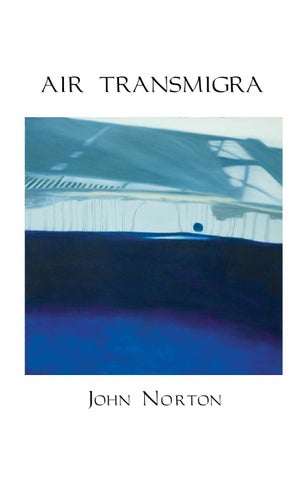 Processional Pushed to the front few volunteer some are driven some wander in most reluctant to experience catastrophe we are trying to discern in the haze of ideology whatâ&amp;#x20AC;&amp;#x2122;s out there looking down between our toes we find air from the rear scattered cries of the newly born those who can hear nod look back and grin some jump to the front taking others with them one calls this sacrifice or martyrdom depending

and soon afterwards joined the Saturday Writing Workshop at Small Press Traffic. His poetry and fiction began to appear in small magazines and literary journals. A previous book of prose poems and sketches won an American Book Award. Heâ&amp;#x20AC;&amp;#x2122;s served on the boards of Small Press Traffic and the Irish Arts Foundation, and for many years helped organize the Irish-American Crossroads Festival. He works as a technical writer and editor in Silicon Valley.

Loss is never far from the surface in the

world that John Norton starkly observes in Air Transmigra: “There’s a lot of unhappiness in this business of trolling for disorganized messages.” Time has taken its toll and any turning back is in a nostalgia-free zone, illusion-less and clear as a New England winter day, but seen from a trans-continental distance. Or the distance a painting puts us from its subject. Or the pain that living without illusion makes liminal. — Alan Bernheimer, The Spoonlight Institute

much else besides: about the emptiness and lovelessness of life under capitalism, about the unresolved difficulties of relationships with family, about the anxious question of our dependence on the machines that seem more and more to dominate our lives, about the fate of the planet in catastrophic times. If this seems a grim catalog, that would be misleading: this poetry is witty and ironic: “God helps the weak/ the powerful create monuments/ to ensure salvation.” And in a poem called “Meditation” Norton imagines draining a reservoir behind a dam when the Buddhist handbooks teach “Empty the mind....” In “Air Transmigra” we seem to be on board a plane the destination of which is Hell. Finally, this poetry regards life with compassion as in the closing lines of “Rules of the Road:” “All praise to the holy ones traversing the great basin—/ Santa Monica San Diego Santa Ana/ San Gabriel San Bernardino/ los santos y los muertos/ intercedar por nosotros” This is about the famous “infrastructure” of California and the migrating peasants upon whose backs we have built a massive economy. “the road is 101/ the reality/ Interstate” Camino Real, pronounced “real” as it was in the play by Tennessee Williams. The Real Road. — Beverly Dahlen, A Reading