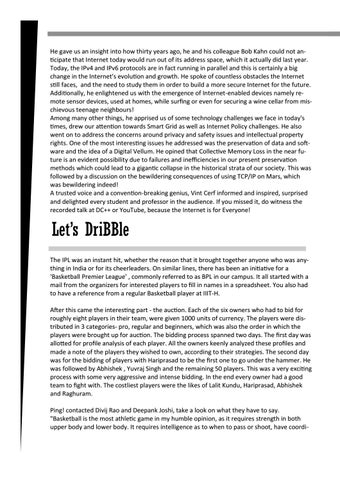 He gave us an insight into how thirty years ago, he and his colleague Bob Kahn could not anticipate that Internet today would run out of its address space, which it actually did last year. Today, the IPv4 and IPv6 protocols are in fact running in parallel and this is certainly a big change in the Internet's evolution and growth. He spoke of countless obstacles the Internet still faces, and the need to study them in order to build a more secure Internet for the future. Additionally, he enlightened us with the emergence of Internet-enabled devices namely remote sensor devices, used at homes, while surfing or even for securing a wine cellar from mischievous teenage neighbours! Among many other things, he apprised us of some technology challenges we face in today's times, drew our attention towards Smart Grid as well as Internet Policy challenges. He also went on to address the concerns around privacy and safety issues and intellectual property rights. One of the most interesting issues he addressed was the preservation of data and software and the idea of a Digital Vellum. He opined that Collective Memory Loss in the near future is an evident possibility due to failures and inefficiencies in our present preservation methods which could lead to a gigantic collapse in the historical strata of our society. This was followed by a discussion on the bewildering consequences of using TCP/IP on Mars, which was bewildering indeed! A trusted voice and a convention-breaking genius, Vint Cerf informed and inspired, surprised and delighted every student and professor in the audience. If you missed it, do witness the recorded talk at DC++ or YouTube, because the Internet is for Everyone!

Letâ&#x20AC;&#x2122;s DriBBle The IPL was an instant hit, whether the reason that it brought together anyone who was anything in India or for its cheerleaders. On similar lines, there has been an initiative for a 'Basketball Premier League' , commonly referred to as BPL in our campus. It all started with a mail from the organizers for interested players to fill in names in a spreadsheet. You also had to have a reference from a regular Basketball player at IIIT-H. After this came the interesting part - the auction. Each of the six owners who had to bid for roughly eight players in their team, were given 1000 units of currency. The players were distributed in 3 categories- pro, regular and beginners, which was also the order in which the players were brought up for auction. The bidding process spanned two days. The first day was allotted for profile analysis of each player. All the owners keenly analyzed these profiles and made a note of the players they wished to own, according to their strategies. The second day was for the bidding of players with Hariprasad to be the first one to go under the hammer. He was followed by Abhishek , Yuvraj Singh and the remaining 50 players. This was a very exciting process with some very aggressive and intense bidding. In the end every owner had a good team to fight with. The costliest players were the likes of Lalit Kundu, Hariprasad, Abhishek and Raghuram. Ping! contacted Divij Rao and Deepank Joshi, take a look on what they have to say. "Basketball is the most athletic game in my humble opinion, as it requires strength in both upper body and lower body. It requires intelligence as to when to pass or shoot, have coordi-