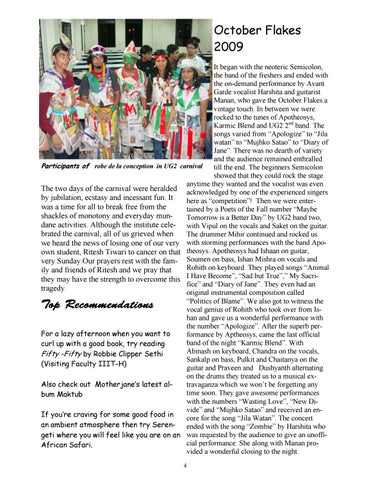 October Flakes 2009 It began with the neoteric Semicolon, the band of the freshers and ended with the on-demand performance by Avant Garde vocalist Harshita and guitarist Manan, who gave the October Flakes a vintage touch. In between we were rocked to the tunes of Apotheosys, Karmic Blend and UG2 2nd band. The songs varied from “Apologize” to “Jila watan” to “Mujhko Satao” to “Diary of Jane”. There was no dearth of variety and the audience remained enthralled Participants of robe de la conception in UG2 carnival till the end. The beginners Semicolon showed that they could rock the stage anytime they wanted and the vocalist was even The two days of the carnival were heralded acknowledged by one of the experienced singers by jubilation, ecstasy and incessant fun. It here as “competition”! Then we were enterwas a time for all to break free from the tained by a Poets of the Fall number “Maybe shackles of monotony and everyday munTomorrow is a Better Day” by UG2 band two, dane activities. Although the institute cele- with Vipul on the vocals and Saket on the guitar. brated the carnival, all of us grieved when The drummer Mihir continued and rocked us we heard the news of losing one of our very with storming performances with the band Apoown student, Ritesh Tiwari to cancer on that theosys. Apotheosys had Ishaan on guitar, very Sunday.Our prayers rest with the fam- Soumen on bass, Ishan Mishra on vocals and Rohith on keyboard. They played songs “Animal ily and friends of Ritesh and we pray that they may have the strength to overcome this I Have Become”, “Sad but True”,” My Sacrifice” and “Diary of Jane”. They even had an tragedy. original instrumental composition called “Politics of Blame”. We also got to witness the vocal genius of Rohith who took over from Ishan and gave us a wonderful performance with the number “Apologize”. After the superb perFor a lazy afternoon when you want to formance by Aptheosys, came the last official band of the night “Karmic Blend”. With curl up with a good book, try reading Abinash on keyboard, Chandra on the vocals, Fifty -Fifty by Robbie Clipper Sethi Sankalp on bass, Pulkit and Chaitanya on the (Visiting Faculty IIIT-H) guitar and Praveen and Dushyanth alternating on the drums they treated us to a musical exAlso check out Motherjane’s latest altravaganza which we won’t be forgetting any time soon. They gave awesome performances bum Maktub with the numbers “Wasting Love”, “New Divide” and “Mujhko Satao” and received an enIf you’re craving for some good food in core for the song “Jila Watan”. The concert an ambient atmosphere then try Serenended with the song “Zombie” by Harshita who geti where you will feel like you are on an was requested by the audience to give an unofficial performance. She along with Manan proAfrican Safari. vided a wonderful closing to the night. 4