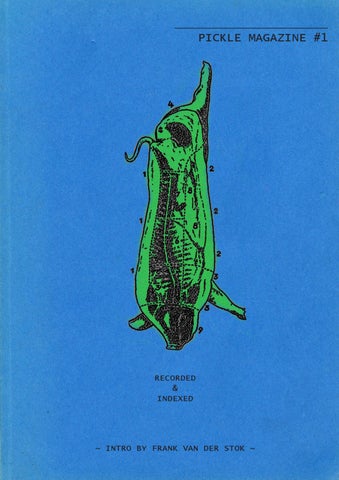 On the processual in art… It’s always a provocative question: who are you really making your work for? For the general public, for a few insiders whose views you really respect, or for yourself? And if you conclude that the answer is exclusively ‘for yourself’, you may still say that it is by way of the public response that the road finally leads back to yourself. For does the artist not have a certain responsibility to society, to occasionally seek that response and bring his artistic expressions into contact with the public? Perhaps it’s fair to say that things can only flourish in a climate in which a certain exchange and interaction, in the sense of ‘give and take’,

takes place with the public at large. This principle is one of the unwritten rules of the arts, which everyone respects to a greater or lesser extent, if only because it essentially harbours a survival mechanism. Even in the arts, there is a kind of market mechanism at work. But when students move beyond these boundaries, without immediately responding to external injunctions, it is striking. Pickle Magazine is an excellent example of ambitious students inviting interaction with the public on their own initiative. In doing so, they seek to present and explain their working procedures to the outside world, in a relaxed and transparent way. This makes them vulnerable to some ex-

tent, since they are still working towards a final result and the work has not yet crystallised into what it will become. And ultimately, everything revolves around process − a complex process, in which authorship, urgency and commitment, mixed in the right proportions and in perfect cohesion, must cast the substantive question that each student has formulated to himself, with a view to the final project, into a specific form. To go through that process, which sometimes involves trial and error and a succession of countless dead ends, an interim moment of presentation, as envisaged here, works two ways: to communicate a process, you need a certain ‘rhetoric’ to convert a train of thought into a

form that the public will find accessible and intelligible. Needless to say, this will also help to clarify the process itself and one’s own development. But for the viewer too, it will provide interesting clues that can help to illuminate the makers’ backgrounds and working methods. It is a praiseworthy and stimulating initiative to force yourself as a maker to confront the outside world, to take clear steps, and to present them in the meantime, in the middle of the process, as half-products. Unless things take a very strange turn, this semi-revelation of such an exemplary process is almost bound to lead, in the long term, to satisfying and crystallised results. Frank van der Stok

De Zuidelijke Wandelweg: (Re) Constructed The zero issue of Pickle Magazine saw the introduction of ‘De Zuidelijke Wandelweg’; the project that will be the subject of my research towards graduation. This now almost vanished road in Amsterdam carries strong memories for many older citizens. How does the disappearance of this road affect these people that are themselves about to pass away? In recent months I have looked at the subject from different angles, trying to figure out what approach will get me to the core of the project. I have images from archives, images from family albums; I conducted interviews, collected old and new maps. Hell, I even took photographs. I have questioned myself what it is exactly that I want to get across and that’s when things got interesting. Why did I really focus on this old road? I knew I would have to start digging in the past, but that’s not enough reason in itself. Or is it? Did I, perhaps unconsciously, ride

the recent wave of interest in history? It is tempting, all these old maps and black and white images are pleasing to the eye. I have to admit that I do not have all the answers yet. It is quite unsettling that some question marks remain with less than three months to go. However, I know that I am getting closer. During this process my focus has shifted somewhat. During interviews with the senior citizens I realised that they were telling me stories about the same events or places. However, when confronted with an old map of the area they would point out different geographical locations. In confronting this kind of subject it is impossible not to address the way memory works, and even more important, the role of forgetting. A first attempt to visualise this is a combined memory map, drawn by the people themselves. At this point I believe that a focus on the people, their stories and the highly unpredictable factor of memory is the way forward. But a lot can happen in three months... Peter Tijhuis

‘I had almost become my Alter Ego’ In the previous issue I introduced the project Alter Ego’s in which I work with the notion of interchangeability of lives. For this project I make portraits of women who’s lives I feel could have been mine, if not for a twist of fate. Last week I lived the life of animal rights activist Sharon in Spain. Never before did a project affect me so strongly.

I came back last week from Madrid. Everything had worked out the way I wanted. I filmed and photographed all the footage I came for. Normally this would make me very happy and content. But now I was haunted by images of animals that suffer day in day out to sustain our consumption society. I instantly became a vegetarian again..and even eggs and milk went of the menu. It felt as if I had almost become my Alter Ego. Thoughts like “ Should I give up my own life and join her in this fight?” even crossed my mind. The message of

Animal Equality is clear and simple. ‘We don’t have the right to exploit animals for our benefits.’ This is a new generation of animal rights activists making use of ‘the media’ in a smart way. They don’t wear forage caps anymore but do ‘Open Rescues’ purposely showing their faces in front of the cameras. They investigate the farms that are under suspicion using Google Earth, GPS and walki talki’s. And their footage is shot on HD cameras for distribution on all possible channels. Sometimes they actually rescue a few animals. Like I did with Sharon. Shortly after I came back to Amsterdam there was a deadline for this issue of Pickle Magazine. I just couldn’t do it. Everything I worked on the last months felt like pretentious artistic bull. I did find the motivation though to try and convince my fellow students to put a suffering pig on the cover of this issue... At the time of writing, I still don’t know if they will accept my proposal.

In the next issue of Pickle Magazine I will have an encounter with an alter ego whom I expect to have a completely different effect on me. Fleur Agema of the PVV agreed to meet me in The Hague to discuss our similarities and differences. Marjolein Busstra

Now that I have been back for a while I have started feeling better and realize that Pickle Magazine is about our working process. So I decided to share this crisis of mine. It feels like I can look back on a very intense and valuable experience that is going to find it’s way into my work.

Reconnecting Ararat…............ My project about Mt. Ararat is about waiting, waiting for answers..... It is ridiculous of me to think that problems that have being there for almost a century can be penetrated in a couple of weeks. This needs planning, time and people who know the country and it’s infrastructure. You can’t just say:’hi there I’m Bob from the Netherlands and I want to place a camera in a political hotspot and military zone in order to bring your two countries together. “ Or can I ? I was talking to Joanna the other day. She is a Dutch women doing business in the countryside of Turkey. She gave me these useful tips:” When I ask my Turkish business partner to do something he is on the phone before I can finish my sentence. Calling his friends. Friends are the way to do business in Turkey”..... So I looked in my Facebook account.

The second tip she gave:” Sometimes it is good to be naïve”.... so I started to write my letters. I am building my own infrastructure, step by step, person by person, All I need now is a little bit more time................ Bob Verbruggen

‘How is the truth out there?’ In the previous issue I explained that the main focus of my work is to reveal the way truth is constructed. I’m working on 3 different topics. This issue I’ll present part of the research on the second one: UFO’s. I’m interested in the way this topic is being ridiculed as soon as it comes up, while hundreds of people report sightings every year; and that is only for the Netherlands. I decided to focus on this small aspect of the phenomenon; the sightings itself.

How do actual eyewitnesses describe them? What’s the role of governments in this? According to the official archives on UFO-research that have been released in recent years, they take it quite seriously. How does the media handle these stories and the people involved? And in the end, what influence does Hollywood have on the mental imagery on UFO-sightings? By putting these four groups together and show the story from the eyewitness to the Hollywood film, I hope to give some insight in the process of the way UFO-imagery works on our minds. Thomas Kuijpers