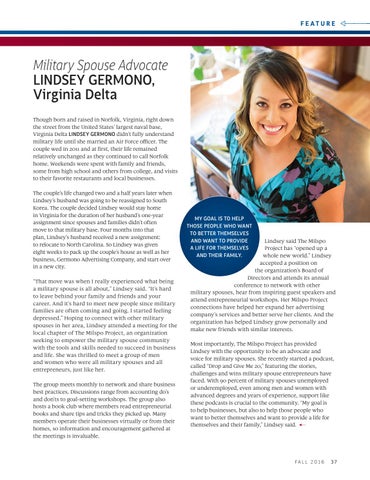 Military Spouse Advocate LINDSEY GERMONO, Virginia Delta Though born and raised in Norfolk, Virginia, right down the street from the United States’ largest naval base, Virginia Delta LINDSEY GERMONO didn’t fully understand military life until she married an Air Force officer. The couple wed in 2011 and at first, their life remained relatively unchanged as they continued to call Norfolk home. Weekends were spent with family and friends, some from high school and others from college, and visits to their favorite restaurants and local businesses. The couple’s life changed two and a half years later when Lindsey’s husband was going to be reassigned to South Korea. The couple decided Lindsey would stay home in Virginia for the duration of her husband’s one-year assignment since spouses and families didn’t often move to that military base. Four months into that plan, Lindsey’s husband received a new assignment: to relocate to North Carolina. So Lindsey was given eight weeks to pack up the couple’s house as well as her business, Germono Advertising Company, and start over in a new city. “That move was when I really experienced what being a military spouse is all about,” Lindsey said. “It’s hard to leave behind your family and friends and your career. And it’s hard to meet new people since military families are often coming and going. I started feeling depressed.” Hoping to connect with other military spouses in her area, Lindsey attended a meeting for the local chapter of The Milspo Project, an organization seeking to empower the military spouse community with the tools and skills needed to succeed in business and life. She was thrilled to meet a group of men and women who were all military spouses and all entrepreneurs, just like her. The group meets monthly to network and share business best practices. Discussions range from accounting do’s and don&#39;ts to goal-setting workshops. The group also hosts a book club where members read entrepreneurial books and share tips and tricks they picked up. Many members operate their businesses virtually or from their homes, so information and encouragement gathered at the meetings is invaluable.

Lindsey said The Milspo Project has “opened up a whole new world.” Lindsey accepted a position on the organization’s Board of Directors and attends its annual conference to network with other military spouses, hear from inspiring guest speakers and attend entrepreneurial workshops. Her Milspo Project connections have helped her expand her advertising company&#39;s services and better serve her clients. And the organization has helped Lindsey grow personally and make new friends with similar interests. Most importantly, The Milspo Project has provided Lindsey with the opportunity to be an advocate and voice for military spouses. She recently started a podcast, called “Drop and Give Me 20,” featuring the stories, challenges and wins military spouse entrepreneurs have faced. With 90 percent of military spouses unemployed or underemployed, even among men and women with advanced degrees and years of experience, support like these podcasts is crucial to the community. “My goal is to help businesses, but also to help those people who want to better themselves and want to provide a life for themselves and their family,” Lindsey said.

In this issue: Meet the Leadership Development Consultants (p.21), She Needed a Hero so That's What She Became (p.30) and State of Pi Beta Phi (p.38) 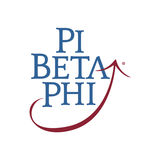