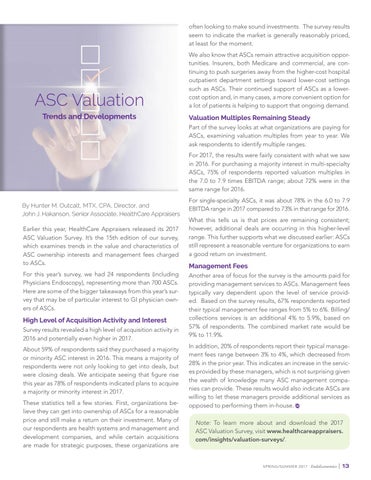 often looking to make sound investments. The survey results seem to indicate the market is generally reasonably priced, at least for the moment.

We also know that ASCs remain attractive acquisition opportunities. Insurers, both Medicare and commercial, are continuing to push surgeries away from the higher-cost hospital outpatient department settings toward lower-cost settings such as ASCs. Their continued support of ASCs as a lowercost option and, in many cases, a more convenient option for a lot of patients is helping to support that ongoing demand.

Valuation Multiples Remaining Steady Part of the survey looks at what organizations are paying for ASCs, examining valuation multiples from year to year. We ask respondents to identify multiple ranges. For 2017, the results were fairly consistent with what we saw in 2016. For purchasing a majority interest in multi-specialty ASCs, 75% of respondents reported valuation multiples in the 7.0 to 7.9 times EBITDA range; about 72% were in the same range for 2016.

By Hunter M. Outcalt, MTX, CPA, Director, and John J. Hakanson, Senior Associate, HealthCare Appraisers Earlier this year, HealthCare Appraisers released its 2017 ASC Valuation Survey. It’s the 15th edition of our survey, which examines trends in the value and characteristics of ASC ownership interests and management fees charged to ASCs. For this year’s survey, we had 24 respondents (including Physicians Endoscopy), representing more than 700 ASCs. Here are some of the bigger takeaways from this year’s survey that may be of particular interest to GI physician owners of ASCs.

High Level of Acquisition Activity and Interest Survey results revealed a high level of acquisition activity in 2016 and potentially even higher in 2017. About 59% of respondents said they purchased a majority or minority ASC interest in 2016. This means a majority of respondents were not only looking to get into deals, but were closing deals. We anticipate seeing that figure rise this year as 78% of respondents indicated plans to acquire a majority or minority interest in 2017. These statistics tell a few stories. First, organizations believe they can get into ownership of ASCs for a reasonable price and still make a return on their investment. Many of our respondents are health systems and management and development companies, and while certain acquisitions are made for strategic purposes, these organizations are

For single-specialty ASCs, it was about 78% in the 6.0 to 7.9 EBITDA range in 2017 compared to 73% in that range for 2016. What this tells us is that prices are remaining consistent; however, additional deals are occurring in this higher-level range. This further supports what we discussed earlier: ASCs still represent a reasonable venture for organizations to earn a good return on investment.

Management Fees Another area of focus for the survey is the amounts paid for providing management services to ASCs. Management fees typically vary dependent upon the level of service provided. Based on the survey results, 67% respondents reported their typical management fee ranges from 5% to 6%. Billing/ collections services is an additional 4% to 5.9%, based on 57% of respondents. The combined market rate would be 9% to 11.9%. In addition, 20% of respondents report their typical management fees range between 3% to 4%, which decreased from 28% in the prior year. This indicates an increase in the services provided by these managers, which is not surprising given the wealth of knowledge many ASC management companies can provide. These results would also indicate ASCs are willing to let these managers provide additional services as opposed to performing them in-house. Note: To learn more about and download the 2017 ASC Valuation Survey, visit www.healthcareappraisers. com/insights/valuation-surveys/. 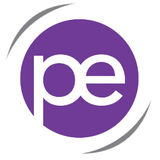 EndoEconomics™ is a GI-dedicated quarterly journal, specifically focused on the current topics faced by the GI community and GI physician ow...

EndoEconomics™ is a GI-dedicated quarterly journal, specifically focused on the current topics faced by the GI community and GI physician ow...