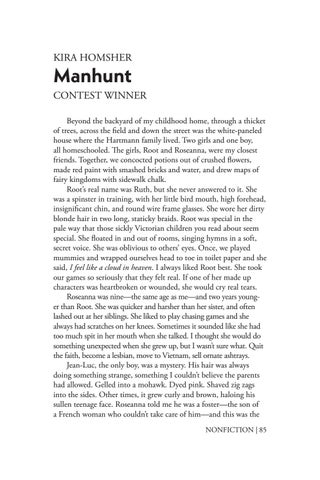 CONTEST WINNER Beyond the backyard of my childhood home, through a thicket of trees, across the field and down the street was the white-paneled house where the Hartmann family lived. Two girls and one boy, all homeschooled. The girls, Root and Roseanna, were my closest friends. Together, we concocted potions out of crushed flowers, made red paint with smashed bricks and water, and drew maps of fairy kingdoms with sidewalk chalk. Root’s real name was Ruth, but she never answered to it. She was a spinster in training, with her little bird mouth, high forehead, insignificant chin, and round wire frame glasses. She wore her dirty blonde hair in two long, staticky braids. Root was special in the pale way that those sickly Victorian children you read about seem special. She floated in and out of rooms, singing hymns in a soft, secret voice. She was oblivious to others’ eyes. Once, we played mummies and wrapped ourselves head to toe in toilet paper and she said, I feel like a cloud in heaven. I always liked Root best. She took our games so seriously that they felt real. If one of her made up characters was heartbroken or wounded, she would cry real tears. Roseanna was nine—the same age as me—and two years younger than Root. She was quicker and harsher than her sister, and often lashed out at her siblings. She liked to play chasing games and she always had scratches on her knees. Sometimes it sounded like she had too much spit in her mouth when she talked. I thought she would do something unexpected when she grew up, but I wasn’t sure what. Quit the faith, become a lesbian, move to Vietnam, sell ornate ashtrays. Jean-Luc, the only boy, was a mystery. His hair was always doing something strange, something I couldn’t believe the parents had allowed. Gelled into a mohawk. Dyed pink. Shaved zig zags into the sides. Other times, it grew curly and brown, haloing his sullen teenage face. Roseanna told me he was a foster—the son of a French woman who couldn’t take care of him—and this was the NONFICTION | 85