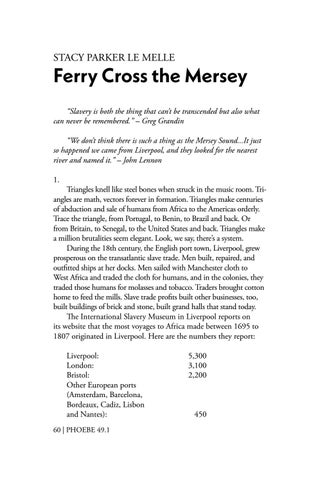 Ferry Cross the Mersey “Slavery is both the thing that can’t be transcended but also what can never be remembered.” – Greg Grandin “We don’t think there is such a thing as the Mersey Sound...It just so happened we came from Liverpool, and they looked for the nearest river and named it.” – John Lennon 1.

Triangles knell like steel bones when struck in the music room. Triangles are math, vectors forever in formation. Triangles make centuries of abduction and sale of humans from Africa to the Americas orderly. Trace the triangle, from Portugal, to Benin, to Brazil and back. Or from Britain, to Senegal, to the United States and back. Triangles make a million brutalities seem elegant. Look, we say, there’s a system. During the 18th century, the English port town, Liverpool, grew prosperous on the transatlantic slave trade. Men built, repaired, and outfitted ships at her docks. Men sailed with Manchester cloth to West Africa and traded the cloth for humans, and in the colonies, they traded those humans for molasses and tobacco. Traders brought cotton home to feed the mills. Slave trade profits built other businesses, too, built buildings of brick and stone, built grand halls that stand today. The International Slavery Museum in Liverpool reports on its website that the most voyages to Africa made between 1695 to 1807 originated in Liverpool. Here are the numbers they report: Liverpool: London: Bristol: Other European ports (Amsterdam, Barcelona, Bordeaux, Cadiz, Lisbon and Nantes): 60 | PHOEBE 49.1