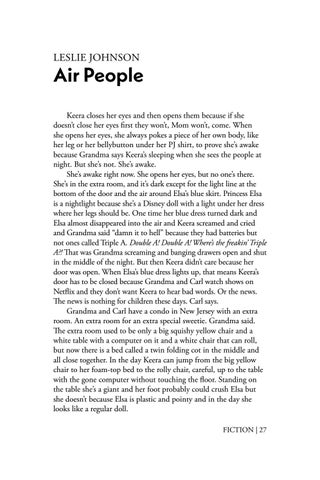 Air People Keera closes her eyes and then opens them because if she doesn’t close her eyes first they won’t, Mom won’t, come. When she opens her eyes, she always pokes a piece of her own body, like her leg or her bellybutton under her PJ shirt, to prove she’s awake because Grandma says Keera’s sleeping when she sees the people at night. But she’s not. She’s awake. She’s awake right now. She opens her eyes, but no one’s there. She’s in the extra room, and it’s dark except for the light line at the bottom of the door and the air around Elsa’s blue skirt. Princess Elsa is a nightlight because she’s a Disney doll with a light under her dress where her legs should be. One time her blue dress turned dark and Elsa almost disappeared into the air and Keera screamed and cried and Grandma said “damn it to hell” because they had batteries but not ones called Triple A. Double A! Double A! Where’s the freakin’ Triple A?! That was Grandma screaming and banging drawers open and shut in the middle of the night. But then Keera didn’t care because her door was open. When Elsa’s blue dress lights up, that means Keera’s door has to be closed because Grandma and Carl watch shows on Netflix and they don’t want Keera to hear bad words. Or the news. The news is nothing for children these days. Carl says. Grandma and Carl have a condo in New Jersey with an extra room. An extra room for an extra special sweetie. Grandma said. The extra room used to be only a big squishy yellow chair and a white table with a computer on it and a white chair that can roll, but now there is a bed called a twin folding cot in the middle and all close together. In the day Keera can jump from the big yellow chair to her foam-top bed to the rolly chair, careful, up to the table with the gone computer without touching the floor. Standing on the table she’s a giant and her foot probably could crush Elsa but she doesn’t because Elsa is plastic and pointy and in the day she looks like a regular doll. FICTION | 27