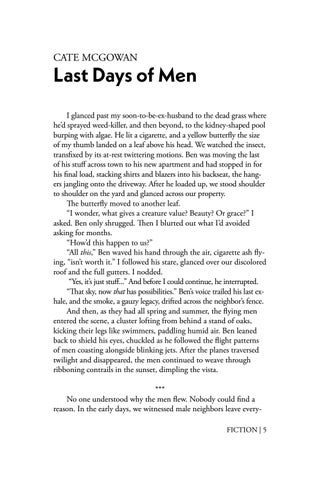 Last Days of Men I glanced past my soon-to-be-ex-husband to the dead grass where he’d sprayed weed-killer, and then beyond, to the kidney-shaped pool burping with algae. He lit a cigarette, and a yellow butterfly the size of my thumb landed on a leaf above his head. We watched the insect, transfixed by its at-rest twittering motions. Ben was moving the last of his stuff across town to his new apartment and had stopped in for his final load, stacking shirts and blazers into his backseat, the hangers jangling onto the driveway. After he loaded up, we stood shoulder to shoulder on the yard and glanced across our property. The butterfly moved to another leaf. “I wonder, what gives a creature value? Beauty? Or grace?” I asked. Ben only shrugged. Then I blurted out what I’d avoided asking for months. “How’d this happen to us?” “All this,” Ben waved his hand through the air, cigarette ash flying, “isn’t worth it.” I followed his stare, glanced over our discolored roof and the full gutters. I nodded. “Yes, it’s just stuff...” And before I could continue, he interrupted. “That sky, now that has possibilities.” Ben’s voice trailed his last exhale, and the smoke, a gauzy legacy, drifted across the neighbor’s fence. And then, as they had all spring and summer, the flying men entered the scene, a cluster lofting from behind a stand of oaks, kicking their legs like swimmers, paddling humid air. Ben leaned back to shield his eyes, chuckled as he followed the flight patterns of men coasting alongside blinking jets. After the planes traversed twilight and disappeared, the men continued to weave through ribboning contrails in the sunset, dimpling the vista. *** No one understood why the men flew. Nobody could find a reason. In the early days, we witnessed male neighbors leave everyFICTION | 5