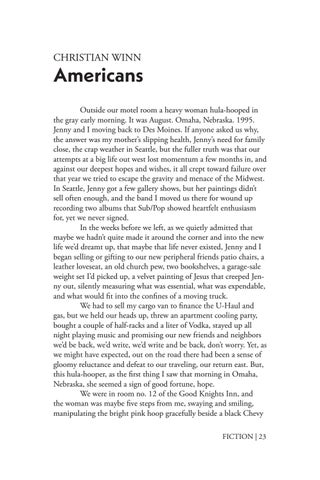 Americans Outside our motel room a heavy woman hula-hooped in the gray early morning. It was August. Omaha, Nebraska. 1995. Jenny and I moving back to Des Moines. If anyone asked us why, the answer was my mother’s slipping health, Jenny’s need for family close, the crap weather in Seattle, but the fuller truth was that our attempts at a big life out west lost momentum a few months in, and against our deepest hopes and wishes, it all crept toward failure over that year we tried to escape the gravity and menace of the Midwest. In Seattle, Jenny got a few gallery shows, but her paintings didn’t sell often enough, and the band I moved us there for wound up recording two albums that Sub/Pop showed heartfelt enthusiasm for, yet we never signed. In the weeks before we left, as we quietly admitted that maybe we hadn’t quite made it around the corner and into the new life we’d dreamt up, that maybe that life never existed, Jenny and I began selling or gifting to our new peripheral friends patio chairs, a leather loveseat, an old church pew, two bookshelves, a garage-sale weight set I’d picked up, a velvet painting of Jesus that creeped Jenny out, silently measuring what was essential, what was expendable, and what would fit into the confines of a moving truck. We had to sell my cargo van to finance the U-Haul and gas, but we held our heads up, threw an apartment cooling party, bought a couple of half-racks and a liter of Vodka, stayed up all night playing music and promising our new friends and neighbors we’d be back, we’d write, we’d write and be back, don’t worry. Yet, as we might have expected, out on the road there had been a sense of gloomy reluctance and defeat to our traveling, our return east. But, this hula-hooper, as the first thing I saw that morning in Omaha, Nebraska, she seemed a sign of good fortune, hope. We were in room no. 12 of the Good Knights Inn, and the woman was maybe five steps from me, swaying and smiling, manipulating the bright pink hoop gracefully beside a black Chevy FICTION | 23