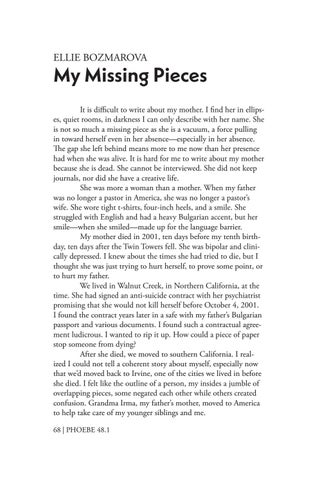 My Missing Pieces It is difficult to write about my mother. I find her in ellipses, quiet rooms, in darkness I can only describe with her name. She is not so much a missing piece as she is a vacuum, a force pulling in toward herself even in her absence—especially in her absence. The gap she left behind means more to me now than her presence had when she was alive. It is hard for me to write about my mother because she is dead. She cannot be interviewed. She did not keep journals, nor did she have a creative life. She was more a woman than a mother. When my father was no longer a pastor in America, she was no longer a pastor’s wife. She wore tight t-shirts, four-inch heels, and a smile. She struggled with English and had a heavy Bulgarian accent, but her smile—when she smiled—made up for the language barrier. My mother died in 2001, ten days before my tenth birthday, ten days after the Twin Towers fell. She was bipolar and clinically depressed. I knew about the times she had tried to die, but I thought she was just trying to hurt herself, to prove some point, or to hurt my father. We lived in Walnut Creek, in Northern California, at the time. She had signed an anti-suicide contract with her psychiatrist promising that she would not kill herself before October 4, 2001. I found the contract years later in a safe with my father’s Bulgarian passport and various documents. I found such a contractual agreement ludicrous. I wanted to rip it up. How could a piece of paper stop someone from dying? After she died, we moved to southern California. I realized I could not tell a coherent story about myself, especially now that we’d moved back to Irvine, one of the cities we lived in before she died. I felt like the outline of a person, my insides a jumble of overlapping pieces, some negated each other while others created confusion. Grandma Irma, my father’s mother, moved to America to help take care of my younger siblings and me. 68 | PHOEBE 48.1