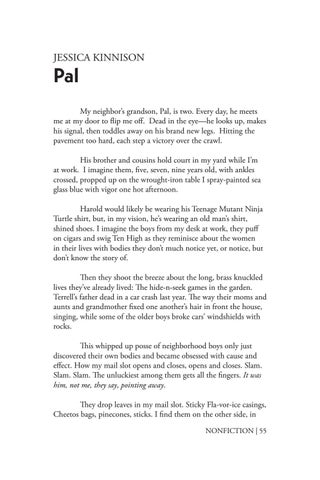 My neighbor’s grandson, Pal, is two. Every day, he meets me at my door to flip me off. Dead in the eye—he looks up, makes his signal, then toddles away on his brand new legs. Hitting the pavement too hard, each step a victory over the crawl. His brother and cousins hold court in my yard while I’m at work. I imagine them, five, seven, nine years old, with ankles crossed, propped up on the wrought-iron table I spray-painted sea glass blue with vigor one hot afternoon. Harold would likely be wearing his Teenage Mutant Ninja Turtle shirt, but, in my vision, he’s wearing an old man’s shirt, shined shoes. I imagine the boys from my desk at work, they puff on cigars and swig Ten High as they reminisce about the women in their lives with bodies they don’t much notice yet, or notice, but don’t know the story of. Then they shoot the breeze about the long, brass knuckled lives they’ve already lived: The hide-n-seek games in the garden. Terrell’s father dead in a car crash last year. The way their moms and aunts and grandmother fixed one another’s hair in front the house, singing, while some of the older boys broke cars’ windshields with rocks. This whipped up posse of neighborhood boys only just discovered their own bodies and became obsessed with cause and effect. How my mail slot opens and closes, opens and closes. Slam. Slam. Slam. The unluckiest among them gets all the fingers. It was him, not me, they say, pointing away. They drop leaves in my mail slot. Sticky Fla-vor-ice casings, Cheetos bags, pinecones, sticks. I find them on the other side, in NONFICTION | 55