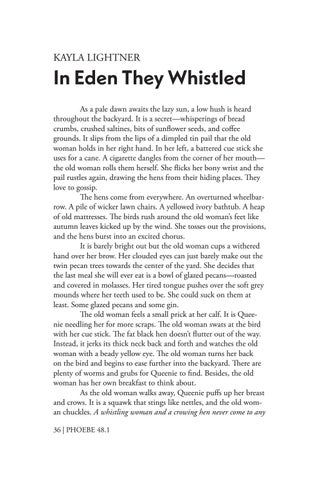 In Eden They Whistled As a pale dawn awaits the lazy sun, a low hush is heard throughout the backyard. It is a secret—whisperings of bread crumbs, crushed saltines, bits of sunflower seeds, and coffee grounds. It slips from the lips of a dimpled tin pail that the old woman holds in her right hand. In her left, a battered cue stick she uses for a cane. A cigarette dangles from the corner of her mouth— the old woman rolls them herself. She flicks her bony wrist and the pail rustles again, drawing the hens from their hiding places. They love to gossip. The hens come from everywhere. An overturned wheelbarrow. A pile of wicker lawn chairs. A yellowed ivory bathtub. A heap of old mattresses. The birds rush around the old woman’s feet like autumn leaves kicked up by the wind. She tosses out the provisions, and the hens burst into an excited chorus. It is barely bright out but the old woman cups a withered hand over her brow. Her clouded eyes can just barely make out the twin pecan trees towards the center of the yard. She decides that the last meal she will ever eat is a bowl of glazed pecans—roasted and covered in molasses. Her tired tongue pushes over the soft grey mounds where her teeth used to be. She could suck on them at least. Some glazed pecans and some gin. The old woman feels a small prick at her calf. It is Queenie needling her for more scraps. The old woman swats at the bird with her cue stick. The fat black hen doesn’t flutter out of the way. Instead, it jerks its thick neck back and forth and watches the old woman with a beady yellow eye. The old woman turns her back on the bird and begins to ease further into the backyard. There are plenty of worms and grubs for Queenie to find. Besides, the old woman has her own breakfast to think about. As the old woman walks away, Queenie puffs up her breast and crows. It is a squawk that stings like nettles, and the old woman chuckles. A whistling woman and a crowing hen never come to any 36 | PHOEBE 48.1