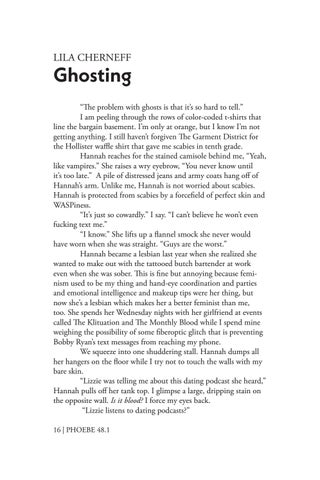 Ghosting “The problem with ghosts is that it’s so hard to tell.” I am peeling through the rows of color-coded t-shirts that line the bargain basement. I’m only at orange, but I know I’m not getting anything. I still haven’t forgiven The Garment District for the Hollister waffle shirt that gave me scabies in tenth grade. Hannah reaches for the stained camisole behind me, “Yeah, like vampires.” She raises a wry eyebrow, “You never know until it’s too late.” A pile of distressed jeans and army coats hang off of Hannah’s arm. Unlike me, Hannah is not worried about scabies. Hannah is protected from scabies by a forcefield of perfect skin and WASPiness. “It’s just so cowardly.” I say. “I can’t believe he won’t even fucking text me.” “I know.” She lifts up a flannel smock she never would have worn when she was straight. “Guys are the worst.” Hannah became a lesbian last year when she realized she wanted to make out with the tattooed butch bartender at work even when she was sober. This is fine but annoying because feminism used to be my thing and hand-eye coordination and parties and emotional intelligence and makeup tips were her thing, but now she’s a lesbian which makes her a better feminist than me, too. She spends her Wednesday nights with her girlfriend at events called The Klituation and The Monthly Blood while I spend mine weighing the possibility of some fiberoptic glitch that is preventing Bobby Ryan’s text messages from reaching my phone. We squeeze into one shuddering stall. Hannah dumps all her hangers on the floor while I try not to touch the walls with my bare skin. “Lizzie was telling me about this dating podcast she heard,” Hannah pulls off her tank top. I glimpse a large, dripping stain on the opposite wall. Is it blood? I force my eyes back. “Lizzie listens to dating podcasts?” 16 | PHOEBE 48.1