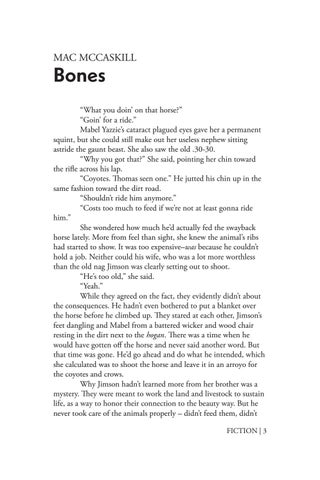 “What you doin’ on that horse?” “Goin’ for a ride.” Mabel Yazzie’s cataract plagued eyes gave her a permanent squint, but she could still make out her useless nephew sitting astride the gaunt beast. She also saw the old .30-30. “Why you got that?” She said, pointing her chin toward the rifle across his lap. “Coyotes. Thomas seen one.” He jutted his chin up in the same fashion toward the dirt road. “Shouldn’t ride him anymore.” “Costs too much to feed if we’re not at least gonna ride him.” She wondered how much he’d actually fed the swayback horse lately. More from feel than sight, she knew the animal’s ribs had started to show. It was too expensive–was because he couldn’t hold a job. Neither could his wife, who was a lot more worthless than the old nag Jimson was clearly setting out to shoot. “He’s too old,” she said. “Yeah.” While they agreed on the fact, they evidently didn’t about the consequences. He hadn’t even bothered to put a blanket over the horse before he climbed up. They stared at each other, Jimson’s feet dangling and Mabel from a battered wicker and wood chair resting in the dirt next to the hogan. There was a time when he would have gotten off the horse and never said another word. But that time was gone. He’d go ahead and do what he intended, which she calculated was to shoot the horse and leave it in an arroyo for the coyotes and crows. Why Jimson hadn’t learned more from her brother was a mystery. They were meant to work the land and livestock to sustain life, as a way to honor their connection to the beauty way. But he never took care of the animals properly – didn’t feed them, didn’t FICTION | 3