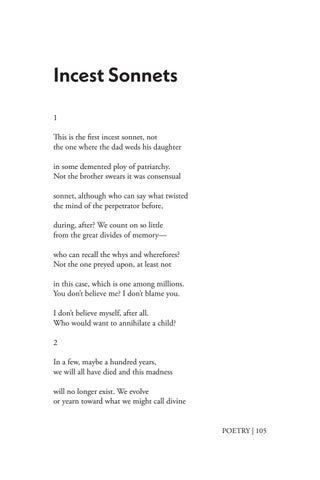 Incest Sonnets 1 This is the first incest sonnet, not the one where the dad weds his daughter in some demented ploy of patriarchy. Not the brother swears it was consensual sonnet, although who can say what twisted the mind of the perpetrator before, during, after? We count on so little from the great divides of memory— who can recall the whys and wherefores? Not the one preyed upon, at least not in this case, which is one among millions. You don’t believe me? I don’t blame you. I don’t believe myself, after all. Who would want to annihilate a child? 2 In a few, maybe a hundred years, we will all have died and this madness will no longer exist. We evolve or yearn toward what we might call divine POETRY | 105