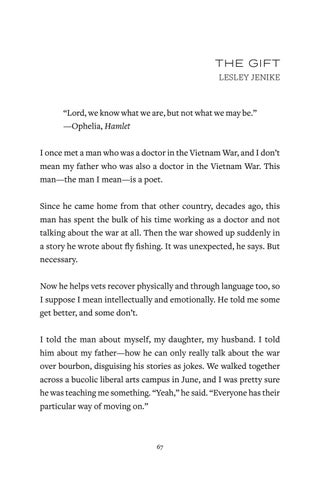 “Lord, we know what we are, but not what we may be.” —Ophelia, Hamlet I once met a man who was a doctor in the Vietnam War, and I don’t mean my father who was also a doctor in the Vietnam War. This man—the man I mean—is a poet. Since he came home from that other country, decades ago, this man has spent the bulk of his time working as a doctor and not talking about the war at all. Then the war showed up suddenly in a story he wrote about fly fishing. It was unexpected, he says. But necessary. Now he helps vets recover physically and through language too, so I suppose I mean intellectually and emotionally. He told me some get better, and some don’t. I told the man about myself, my daughter, my husband. I told him about my father—how he can only really talk about the war over bourbon, disguising his stories as jokes. We walked together across a bucolic liberal arts campus in June, and I was pretty sure he was teaching me something. “Yeah,” he said. “Everyone has their particular way of moving on.”