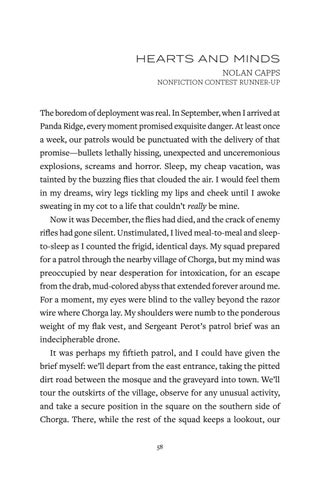 The boredom of deployment was real. In September, when I arrived at Panda Ridge, every moment promised exquisite danger. At least once a week, our patrols would be punctuated with the delivery of that promise—bullets lethally hissing, unexpected and unceremonious explosions, screams and horror. Sleep, my cheap vacation, was tainted by the buzzing flies that clouded the air. I would feel them in my dreams, wiry legs tickling my lips and cheek until I awoke sweating in my cot to a life that couldn’t really be mine. Now it was December, the flies had died, and the crack of enemy rifles had gone silent. Unstimulated, I lived meal-to-meal and sleepto-sleep as I counted the frigid, identical days. My squad prepared for a patrol through the nearby village of Chorga, but my mind was preoccupied by near desperation for intoxication, for an escape from the drab, mud-colored abyss that extended forever around me. For a moment, my eyes were blind to the valley beyond the razor wire where Chorga lay. My shoulders were numb to the ponderous weight of my flak vest, and Sergeant Perot’s patrol brief was an indecipherable drone. It was perhaps my fiftieth patrol, and I could have given the brief myself: we’ll depart from the east entrance, taking the pitted dirt road between the mosque and the graveyard into town. We’ll tour the outskirts of the village, observe for any unusual activity, and take a secure position in the square on the southern side of Chorga. There, while the rest of the squad keeps a lookout, our 58