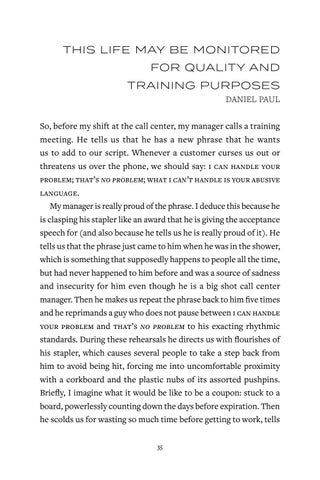 This Life May Be Monitored for Quality and Training PurposeS DANIEL PAUL So, before my shift at the call center, my manager calls a training meeting. He tells us that he has a new phrase that he wants us to add to our script. Whenever a customer curses us out or threatens us over the phone, we should say: I CAN HANDLE YOUR PROBLEM; THAT’S NO PROBLEM; WHAT I CAN’T HANDLE IS YOUR ABUSIVE LANGUAGE. My manager is really proud of the phrase. I deduce this because he is clasping his stapler like an award that he is giving the acceptance speech for (and also because he tells us he is really proud of it). He tells us that the phrase just came to him when he was in the shower, which is something that supposedly happens to people all the time, but had never happened to him before and was a source of sadness and insecurity for him even though he is a big shot call center manager. Then he makes us repeat the phrase back to him five times and he reprimands a guy who does not pause between I CAN HANDLE YOUR PROBLEM and THAT’S NO PROBLEM to his exacting rhythmic standards. During these rehearsals he directs us with flourishes of his stapler, which causes several people to take a step back from him to avoid being hit, forcing me into uncomfortable proximity with a corkboard and the plastic nubs of its assorted pushpins. Briefly, I imagine what it would be like to be a coupon: stuck to a board, powerlessly counting down the days before expiration. Then he scolds us for wasting so much time before getting to work, tells 35