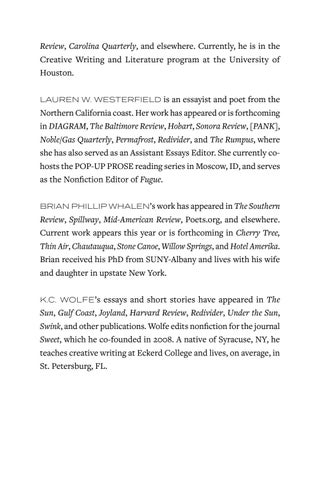 Review, Carolina Quarterly, and elsewhere. Currently, he is in the Creative Writing and Literature program at the University of Houston. is an essayist and poet from the Northern California coast. Her work has appeared or is forthcoming in DIAGRAM, The Baltimore Review, Hobart, Sonora Review, [PANK], Noble/Gas Quarterly, Permafrost, Redivider, and The Rumpus, where she has also served as an Assistant Essays Editor. She currently cohosts the POP-UP PROSE reading series in Moscow, ID, and serves as the Nonfiction Editor of Fugue. LAUREN W. WESTERFIELD

BRIAN PHILLIP WHALENâ&amp;#x20AC;&amp;#x2122;s work has appeared in The Southern

essays and short stories have appeared in The Sun, Gulf Coast, Joyland, Harvard Review, Redivider, Under the Sun, Swink, and other publications. Wolfe edits nonfiction for the journal Sweet, which he co-founded in 2008. A native of Syracuse, NY, he teaches creative writing at Eckerd College and lives, on average, in St. Petersburg, FL.