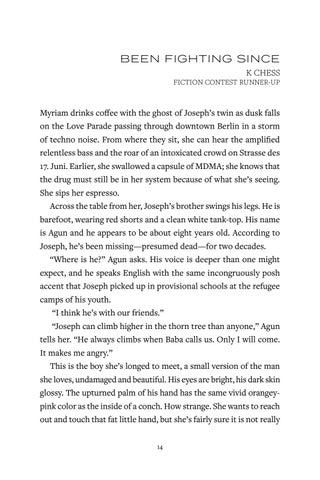 Been Fighting Since K CHESS

Myriam drinks coffee with the ghost of Joseph’s twin as dusk falls on the Love Parade passing through downtown Berlin in a storm of techno noise. From where they sit, she can hear the amplified relentless bass and the roar of an intoxicated crowd on Strasse des 17. Juni. Earlier, she swallowed a capsule of MDMA; she knows that the drug must still be in her system because of what she’s seeing. She sips her espresso. Across the table from her, Joseph’s brother swings his legs. He is barefoot, wearing red shorts and a clean white tank-top. His name is Agun and he appears to be about eight years old. According to Joseph, he’s been missing—presumed dead—for two decades. “Where is he?” Agun asks. His voice is deeper than one might expect, and he speaks English with the same incongruously posh accent that Joseph picked up in provisional schools at the refugee camps of his youth. “I think he’s with our friends.” “Joseph can climb higher in the thorn tree than anyone,” Agun tells her. “He always climbs when Baba calls us. Only I will come. It makes me angry.” This is the boy she’s longed to meet, a small version of the man she loves, undamaged and beautiful. His eyes are bright, his dark skin glossy. The upturned palm of his hand has the same vivid orangeypink color as the inside of a conch. How strange. She wants to reach out and touch that fat little hand, but she’s fairly sure it is not really 14