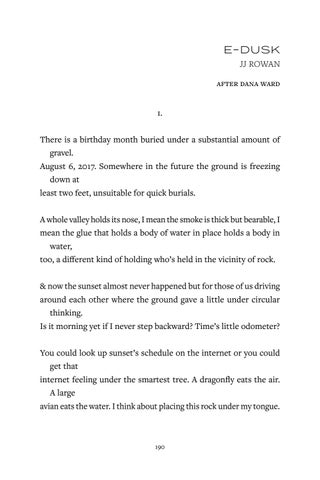 E-Dusk JJ ROWAN AFTER DANA WARD I. There is a birthday month buried under a substantial amount of gravel. August 6, 2017. Somewhere in the future the ground is freezing down at least two feet, unsuitable for quick burials. A whole valley holds its nose, I mean the smoke is thick but bearable, I mean the glue that holds a body of water in place holds a body in water, too, a different kind of holding who’s held in the vicinity of rock. &amp; now the sunset almost never happened but for those of us driving around each other where the ground gave a little under circular thinking. Is it morning yet if I never step backward? Time’s little odometer? You could look up sunset’s schedule on the internet or you could get that internet feeling under the smartest tree. A dragonfly eats the air. A large avian eats the water. I think about placing this rock under my tongue.