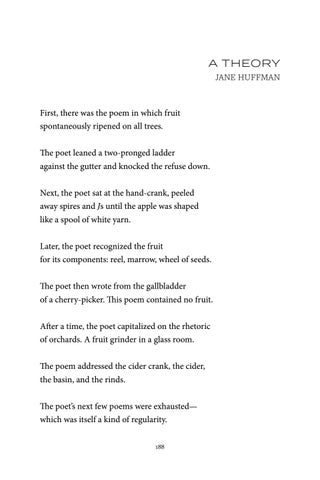 First, there was the poem in which fruit spontaneously ripened on all trees. The poet leaned a two-pronged ladder against the gutter and knocked the refuse down. Next, the poet sat at the hand-crank, peeled away spires and Js until the apple was shaped like a spool of white yarn. Later, the poet recognized the fruit for its components: reel, marrow, wheel of seeds. The poet then wrote from the gallbladder of a cherry-picker. This poem contained no fruit. After a time, the poet capitalized on the rhetoric of orchards. A fruit grinder in a glass room. The poem addressed the cider crank, the cider, the basin, and the rinds. The poetâ&amp;#x20AC;&amp;#x2122;s next few poems were exhaustedâ&amp;#x20AC;&amp;#x201D; which was itself a kind of regularity. 188