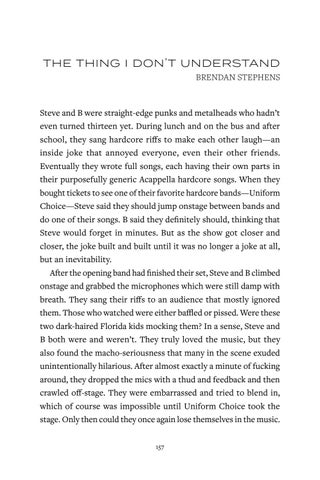 Steve and B were straight-edge punks and metalheads who hadn’t even turned thirteen yet. During lunch and on the bus and after school, they sang hardcore riffs to make each other laugh—an inside joke that annoyed everyone, even their other friends. Eventually they wrote full songs, each having their own parts in their purposefully generic Acappella hardcore songs. When they bought tickets to see one of their favorite hardcore bands—Uniform Choice—Steve said they should jump onstage between bands and do one of their songs. B said they definitely should, thinking that Steve would forget in minutes. But as the show got closer and closer, the joke built and built until it was no longer a joke at all, but an inevitability. After the opening band had finished their set, Steve and B climbed onstage and grabbed the microphones which were still damp with breath. They sang their riffs to an audience that mostly ignored them. Those who watched were either baffled or pissed. Were these two dark-haired Florida kids mocking them? In a sense, Steve and B both were and weren’t. They truly loved the music, but they also found the macho-seriousness that many in the scene exuded unintentionally hilarious. After almost exactly a minute of fucking around, they dropped the mics with a thud and feedback and then crawled off-stage. They were embarrassed and tried to blend in, which of course was impossible until Uniform Choice took the stage. Only then could they once again lose themselves in the music. 157