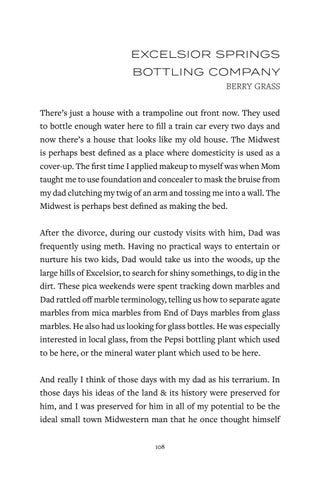 Excelsior Springs Bottling Company BERRY GRASS Thereâ&amp;#x20AC;&amp;#x2122;s just a house with a trampoline out front now. They used to bottle enough water here to fill a train car every two days and now thereâ&amp;#x20AC;&amp;#x2122;s a house that looks like my old house. The Midwest is perhaps best defined as a place where domesticity is used as a cover-up. The first time I applied makeup to myself was when Mom taught me to use foundation and concealer to mask the bruise from my dad clutching my twig of an arm and tossing me into a wall. The Midwest is perhaps best defined as making the bed. After the divorce, during our custody visits with him, Dad was frequently using meth. Having no practical ways to entertain or nurture his two kids, Dad would take us into the woods, up the large hills of Excelsior, to search for shiny somethings, to dig in the dirt. These pica weekends were spent tracking down marbles and Dad rattled off marble terminology, telling us how to separate agate marbles from mica marbles from End of Days marbles from glass marbles. He also had us looking for glass bottles. He was especially interested in local glass, from the Pepsi bottling plant which used to be here, or the mineral water plant which used to be here. And really I think of those days with my dad as his terrarium. In those days his ideas of the land &amp; its history were preserved for him, and I was preserved for him in all of my potential to be the ideal small town Midwestern man that he once thought himself 108