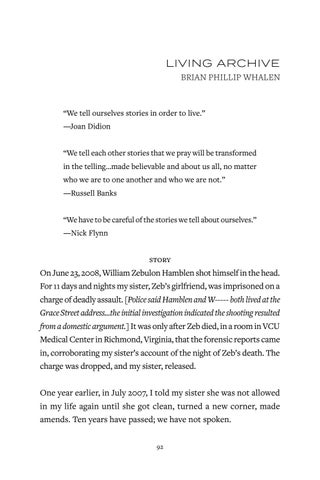 “We tell ourselves stories in order to live.” —Joan Didion “We tell each other stories that we pray will be transformed in the telling…made believable and about us all, no matter who we are to one another and who we are not.” —Russell Banks “We have to be careful of the stories we tell about ourselves.” —Nick Flynn

STORY On June 23, 2008, William Zebulon Hamblen shot himself in the head. For 11 days and nights my sister, Zeb’s girlfriend, was imprisoned on a charge of deadly assault. [Police said Hamblen and W----- both lived at the Grace Street address...the initial investigation indicated the shooting resulted from a domestic argument.] It was only after Zeb died, in a room in VCU Medical Center in Richmond, Virginia, that the forensic reports came in, corroborating my sister’s account of the night of Zeb’s death. The charge was dropped, and my sister, released. One year earlier, in July 2007, I told my sister she was not allowed in my life again until she got clean, turned a new corner, made amends. Ten years have passed; we have not spoken. 92