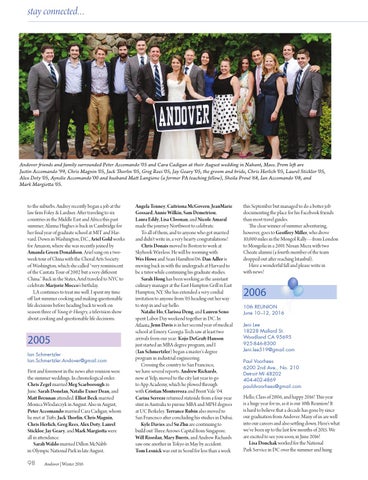 to the suburbs. Audrey recently began a job at the law firm Foley & Lardner. After traveling to six countries in the Middle East and Africa this past summer, Alanna Hughes is back in Cambridge for her final year of graduate school at MIT and Harvard. Down in Washington, D.C., Ariel Gold works for Amazon, where she was recently joined by Amanda Green Donaldson. Ariel sang on a twoweek tour of China with the Choral Arts Society of Washington, which she called “very reminiscent of the Cantata Tour of 2002 but a very different China.” Back in the States, Ariel traveled to NYC to celebrate Marjorie Mocco’s birthday. LA continues to treat me well. I spent my time off last summer cooking and making questionable life decisions before heading back to work on season three of Young & Hungry, a television show about cooking and questionable life decisions.

Angela Tenney, Caitriona McGovern, JeanMarie Gossard, Annie Wilkin, Sam Demetriou, Laura Eddy, Lisa Cloonan, and Nicole Amaral made the journey Northwest to celebrate. To all of them, and to anyone who got married and didn’t write in, a very hearty congratulations! Chris Donais moved to Boston to work at Skyhook Wireless. He will be rooming with Wes Howe and Sean Hamilton’06. Dan Adler is moving back in with the undergrads at Harvard to be a tutor while continuing his graduate studies. Sarah Hong has been working as the assistant culinary manager at the East Hampton Grill in East Hampton, N.Y. She has extended a very cordial invitation to anyone from ’05 heading out her way to stop in and say hello. Natalie Ho, Clarissa Deng, and Lauren Seno spent Labor Day weekend together in DC. In Atlanta, Jenn Davis is in her second year of medical school at Emory. Georgia Tech saw at least two arrivals from our year: Kojo DeGraft-Hanson just started an MBA degree program, and I (Ian Schmertzler) began a master’s degree program in industrial engineering. Crossing the country to San Francisco, we have several reports. Andrew Richards, now at Yelp, moved to the city last year to go to App Academy, which he plowed through with Cristian Monterroza and Brent Vale ’04. Carina Serreze returned stateside from a four-year stint in Australia to pursue MBA and MPH degrees at UC Berkeley. Terrance Rubin also moved to San Francisco after concluding his studies in Dubai. Kyle Davies and Su Zhu are continuing to build out Three Arrows Capital from Singapore. Will Riordan, Mary Burris, and Andrew Richards saw one another in Tokyo in May by accident. Tom Lesnick was out in Seoul for less than a week

this September but managed to do a better job documenting the place for his Facebook friends than most travel guides. The clear winner of summer adventuring, however, goes to Geoffrey Miller, who drove 10,000 miles in the Mongol Rally—from London to Mongolia in a 2001 Nissan Micra with two Choate alumni (a fourth member of the team dropped out after reaching Istanbul). Have a wonderful fall and please write in with news!

Hello, Class of 2006, and happy 2016! This year is a huge year for us, as it is our 10th Reunion! It is hard to believe that a decade has gone by since our graduation from Andover. Many of us are well into our careers and also settling down. Here’s what we’ve been up to the last few months of 2015. We are excited to see you soon, in June 2016! Lisa Donchak worked for the National Park Service in DC over the summer and hung 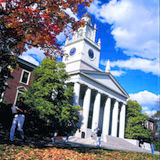 The winter 2016 issue of Andover, the magazine.

The winter 2016 issue of Andover, the magazine.