Cycling and the city 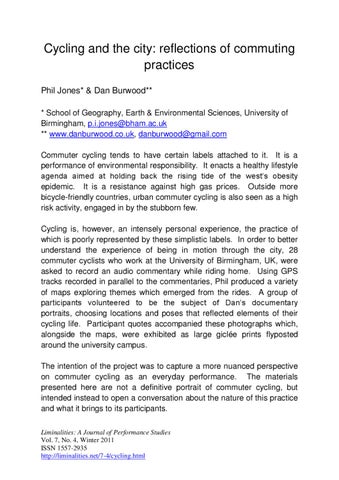 Cycling and the city: reflections of commuting practices Phil Jones* &amp; Dan Burwood** * School of Geography, Earth &amp; Environmental Sciences, University of Birmingham, p.i.jones@bham.ac.uk ** www.danburwood.co.uk, danburwood@gmail.com Commuter cycling tends to have certain labels attached to it. It is a performance of environmental responsibility. It enacts a healthy lifestyle agenda aimed at holding back the rising tide of the westâ&amp;#x20AC;&amp;#x2122;s obesity epidemic. It is a resistance against high gas prices. Outside more bicycle-friendly countries, urban commuter cycling is also seen as a high risk activity, engaged in by the stubborn few. Cycling is, however, an intensely personal experience, the practice of which is poorly represented by these simplistic labels. In order to better understand the experience of being in motion through the city, 28 commuter cyclists who work at the University of Birmingham, UK, were asked to record an audio commentary while riding home. Using GPS tracks recorded in parallel to the commentaries, Phil produced a variety of maps exploring themes which emerged from the rides. A group of participants volunteered to be the subject of Danâ&amp;#x20AC;&amp;#x2122;s documentary portraits, choosing locations and poses that reflected elements of their cycling life. Participant quotes accompanied these photographs which, alongside the maps, were exhibited as large giclĂŠe prints flyposted around the university campus. The intention of the project was to capture a more nuanced perspective on commuter cycling as an everyday performance. The materials presented here are not a definitive portrait of commuter cycling, but intended instead to open a conversation about the nature of this practice and what it brings to its participants. Liminalities: A Journal of Performance Studies Vol. 7, No. 4, Winter 2011 ISSN 1557-2935 http://liminalities.net/7-4/cycling.html

Wearing a Global Positioning System (GPS) receiver turns the body into a giant marker pen, drawing invisible lines across the city. The maps displayed here capture traces of the fleeting and contingent practice of cycling. On the one hand the playful nature of the maps that result seems a subversion of GPS as a military 1 technology. But GPS retains its sinister edge as the researcher collects information about the body of the participant. â&amp;#x20AC;&amp;#x153;I know where you live...â&amp;#x20AC;? 1

Participantsâ&amp;#x20AC;&amp;#x2122; audio commentaries can be read as a performance of landscape as they respond to and 2 reflect upon the passing scene. Looking at where participants talked about animals, a very clear pattern emerges. The cityâ&amp;#x20AC;&amp;#x2122;s waterside cycle routes become an interface between the cyclist and the natural world. Here, practical concerns about traffic fade away creating spaces of positive engagement with the surrounding environment. [click the pushpin to explore the map]

See for instance, Wylie, J. (2005) A single day&#39;s walking: narrating self and landscape on the South West Coast Path, Transactions of the Institute of British Geographers 30:234-47.

Cycling offers a rich sensory engagement with the world around us, unlike the cocooned â&amp;#x20AC;&amp;#x2DC;blandscapeâ&amp;#x20AC;&amp;#x2122; of the private car.3 We transform spaces into places through inscribing meaning onto them. Even the most apparently mundane space can be brought to life by a scent, a memory, a sound. These fragments provide glimpses of the ways place is performed through everyday interactions. [click the pushpin to explore the smellscape]

In the UK, the number of people cycling has plummeted since the mid twentieth century.4 Many noncyclists cite safety as a major reason why they are unwilling to cycle. Accidents, though rare, do happen, creating a strong emotional resonance to different sites around the city for the individuals who have been injured. This map could be read as representing a landscape of fear. Alternatively we can read a landscape of resistance against the dominance of automobility.5

Cyclists are no single tribe.6 Leisure cyclists, vehicular cyclists, off roaders, razor wheeled racers, couriers, casuals and a host of others are not just identifiable by dress and equipment but how they ride. The GPS records show gentle ambles next to the canal, agonising crawls up steep hills, brave dashes across busy junctions, routes chosen to maximise speed, to maximise comfort, to maximise the view. These traces show identity being enacted and inscribed across the city.

The UK is notorious for producing 7 terrible cycle lanes. British cyclists are often left with a choice between road cycling, or enacting various illegal ‘tactics’8 to ride safely. It is common to make use of sidewalks (‘pavements’ in British English) as impromptu cycle lanes at difficult points in the journey. Employing this defensive tactic enacts an implicit critique of the poor cycling infrastructure in UK cities which is frequently blamed for low rates of cycling participation.

Cycling occupies a privileged position between walking and the automobile, allowing distances to be covered quickly, but without isolating the rider from passers-by.9 This is particularly true on cycle routes shared with pedestrians. Not all cyclists are comfortable using a bell to warn pedestrians of their approach, preferring to engage verbally. Where the anonymity of driving tends to bring out aggressive behaviours, cyclists are immersed in the world around them which (sometimes) produces higher standards of civility.10 9

Reflections Different kinds of urban spaces are brought into being by the act of riding. The research and exhibition that this paper documents was intended to open a dialogue about the nature of urban cycle commuting, its practices and practitioners. Like the exhibition itself, exposed to wind and rain, the everyday performances of cycling are ephemeral, fleeting, contingent. The GPS records layer ghostly traces of these performances across cartographic space. In turn, the portraits remind us that these records are not mere ‘data’ within a research project, but were created by people whose lives are not reducible to lines on a map. There is no single category of ‘cyclist’. The individual cycling body is reenacted and re-inscribed on a daily basis. Similarly, there is no city, but multiple cities, brought into being each day by individuals and their engagements with urban space. Any serious attempt to encourage greater levels of cycling participation needs to move away from discourses of safety, environmentalism and healthy lifestyles, to engage with how cycling is performed every day, by a diverse group of people with a diverse range of cycling styles.

Acknowledgements We’d like to thank all the cyclists who took part in the study. The GPS mapping technique was developed as part of the ESRC-funded Rescue Geography project (RES-000-22-2375).

Cycling and the city

This is an article for Liminalities: A journal of performance studies. The journal has a recurring section 'The City' for articles considering performance and performativity in urban environments.