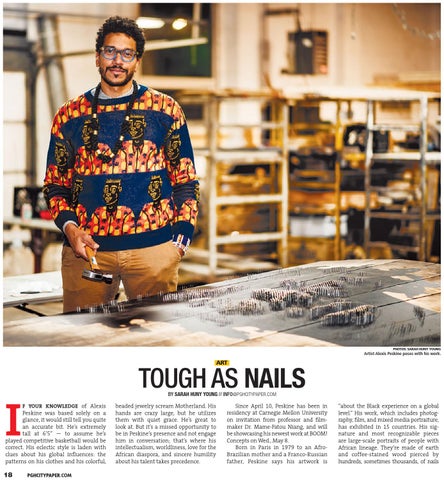 F YOUR KNOWLEDGE of Alexis Peskine was based solely on a glance, it would still tell you quite an accurate bit. He’s extremely tall at 6’5” — to assume he’s played competitive basketball would be correct. His eclectic style is laden with clues about his global inﬂuences: the patterns on his clothes and his colorful,

beaded jewelry scream Motherland. His hands are crazy large, but he utilizes them with quiet grace. He’s great to look at. But it’s a missed opportunity to be in Peskine’s presence and not engage him in conversation; that’s where his intellectualism, worldliness, love for the African diaspora, and sincere humility about his talent takes precedence.

Since April 10, Peskine has been in residency at Carnegie Mellon University on invitation from professor and ﬁlmmaker Dr. Mame-Fatou Niang, and will be showcasing his newest work at BOOM! Concepts on Wed., May 8. Born in Paris in 1979 to an AfroBrazilian mother and a Franco-Russian father, Peskine says his artwork is

“about the Black experience on a global level.” His work, which includes photography, ﬁlm, and mixed media portraiture, has exhibited in 15 countries. His signature and most recognizable pieces are large-scale portraits of people with African lineage. They’re made of earth and coffee-stained wood pierced by hundreds, sometimes thousands, of nails 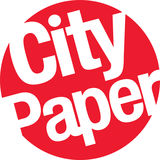