BARKS from the Guild September 2018 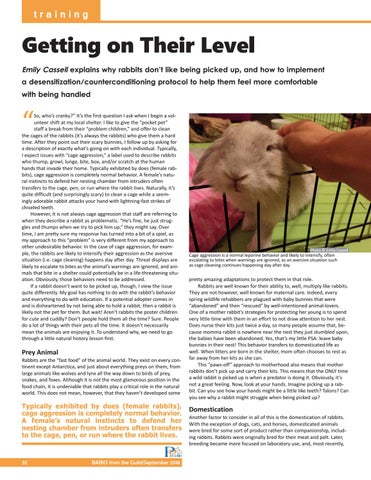 Getting on Their Level

Emily Cassell explains why rabbits don’t like being picked up, and how to implement

a desensitization/counterconditioning protocol to help them feel more comfortable

So, who’s cranky?” It’s the first question I ask when I begin a volunteer shift at my local shelter. I like to give the “pocket pet” staff a break from their “problem children,” and offer to clean the cages of the rabbits (it’s always the rabbits) who give them a hard time. After they point out their scary bunnies, I follow up by asking for a description of exactly what’s going on with each individual. Typically, I expect issues with “cage aggression,” a label used to describe rabbits who thump, growl, lunge, bite, box, and/or scratch at the human hands that invade their home. Typically exhibited by does (female rabbits), cage aggression is completely normal behavior. A female’s natural instincts to defend her nesting chamber from intruders often transfers to the cage, pen, or run where the rabbit lives. Naturally, it’s quite difficult (and surprisingly scary) to clean a cage while a seemingly adorable rabbit attacks your hand with lightning-fast strikes of chiseled teeth. However, it is not always cage aggression that staff are referring to when they describe a rabbit as problematic. “He’s fine, he just struggles and thumps when we try to pick him up,” they might say. Over time, I am pretty sure my response has turned into a bit of a spiel, as my approach to this “problem” is very different from my approach to other undesirable behavior. In the case of cage aggression, for example, the rabbits are likely to intensify their aggression as the aversive situation (i.e. cage cleaning) happens day after day. Threat displays are likely to escalate to bites as the animal’s warnings are ignored, and animals that bite in a shelter could potentially be in a life-threatening situation. Obviously, those behaviors need to be addressed. If a rabbit doesn’t want to be picked up, though, I view the issue quite differently. My goal has nothing to do with the rabbit’s behavior and everything to do with education. If a potential adopter comes in and is disheartened by not being able to hold a rabbit, then a rabbit is likely not the pet for them. But wait! Aren’t rabbits the poster children for cute and cuddly? Don’t people hold them all the time? Sure. People do a lot of things with their pets all the time. It doesn’t necessarily mean the animals are enjoying it. To understand why, we need to go through a little natural history lesson first.

Rabbits are the “fast food” of the animal world. They exist on every continent except Antarctica, and just about everything preys on them, from large animals like wolves and lynx all the way down to birds of prey, snakes, and foxes. Although it is not the most glamorous position in the food chain, it is undeniable that rabbits play a critical role in the natural world. This does not mean, however, that they haven’t developed some

Typically exhibited by does (female rabbits), cage aggression is completely normal behavior. A female’s natural instincts to defend her nesting chamber from intruders often transfers to the cage, pen, or run where the rabbit lives. 32

Cage aggression is a normal leporine behavior and likely to intensify, often escalating to bites when warnings are ignored, as an aversive situation such as cage cleaning continues happening day after day

pretty amazing adaptations to protect them in that role. Rabbits are well known for their ability to, well, multiply like rabbits. They are not however, well known for maternal care. Indeed, every spring wildlife rehabbers are plagued with baby bunnies that were “abandoned” and then “rescued” by well-intentioned animal-lovers. One of a mother rabbit’s strategies for protecting her young is to spend very little time with them in an effort to not draw attention to her nest. Does nurse their kits just twice a day, so many people assume that, because momma rabbit is nowhere near the nest they just stumbled upon, the babies have been abandoned. Yes, that’s my little PSA: leave baby bunnies in their nest! This behavior transfers to domesticated life as well. When litters are born in the shelter, mom often chooses to rest as far away from her kits as she can. This “paws-off” approach to motherhood also means that mother rabbits don’t pick up and carry their kits. This means that the ONLY time a wild rabbit is picked up is when a predator is doing it. Obviously, it’s not a great feeling. Now, look at your hands. Imagine picking up a rabbit. Can you see how your hands might be a little like teeth? Talons? Can you see why a rabbit might struggle when being picked up?

Another factor to consider in all of this is the domestication of rabbits. With the exception of dogs, cats, and horses, domesticated animals were bred for some sort of product rather than companionship, including rabbits. Rabbits were originally bred for their meat and pelt. Later, breeding became more focused on laboratory use, and, most recently,

BARKS from the Guild September 2018