BARKS from the Guild September 2015 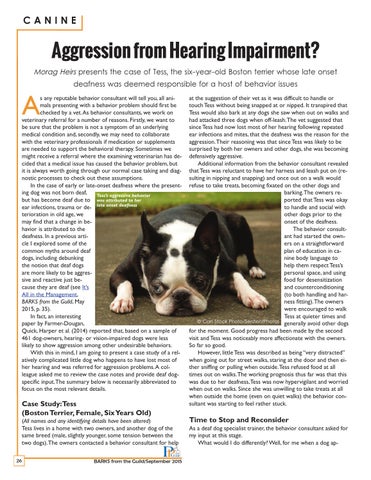 deafness was deemed responsible for a host of behavior issues

s any reputable behavior consultant will tell you, all animals presenting with a behavior problem should first be checked by a vet. As behavior consultants, we work on veterinary referral for a number of reasons. Firstly, we want to be sure that the problem is not a symptom of an underlying medical condition and, secondly, we may need to collaborate with the veterinary professionals if medication or supplements are needed to support the behavioral therapy. Sometimes we might receive a referral where the examining veterinarian has decided that a medical issue has caused the behavior problem, but it is always worth going through our normal case taking and diagnostic processes to check out these assumptions. In the case of early or late-onset deafness where the presenting dog was not born deaf, Tess’s aggressive behavior but has become deaf due to was attributed to her ear infections, trauma or de- late onset deafness terioration in old age, we may find that a change in behavior is attributed to the deafness. In a previous article I explored some of the common myths around deaf dogs, including debunking the notion that deaf dogs are more likely to be aggressive and reactive just because they are deaf (see It’s All in the Management, BARKS from the Guild, May 2015, p. 35). In fact, an interesting paper by Farmer-Dougan, Quick, Harper et al. (2014) reported that, based on a sample of 461 dog-owners, hearing- or vision-impaired dogs were less likely to show aggression among other undesirable behaviors. With this in mind, I am going to present a case study of a relatively complicated little dog who happens to have lost most of her hearing and was referred for aggression problems. A colleague asked me to review the case notes and provide deaf dogspecific input. The summary below is necessarily abbreviated to focus on the most relevant details.

(All names and any identifying details have been altered) Tess lives in a home with two owners, and another dog of the same breed (male, slightly younger, some tension between the two dogs). The owners contacted a behavior consultant for help 26

at the suggestion of their vet as it was difficult to handle or touch Tess without being snapped at or nipped. It transpired that Tess would also bark at any dogs she saw when out on walks and had attacked three dogs when off-leash. The vet suggested that since Tess had now lost most of her hearing following repeated ear infections and mites, that the deafness was the reason for the aggression. Their reasoning was that since Tess was likely to be surprised by both her owners and other dogs, she was becoming defensively aggressive. Additional information from the behavior consultant revealed that Tess was reluctant to have her harness and leash put on (resulting in nipping and snapping) and once out on a walk would refuse to take treats, becoming fixated on the other dogs and barking. The owners reported that Tess was okay to handle and social with other dogs prior to the onset of the deafness. The behavior consultant had started the owners on a straightforward plan of education in canine body language to help them respect Tess’s personal space, and using food for desensitization and counterconditioning (to both handling and harness fitting). The owners were encouraged to walk Tess at quieter times and © Can Stock Photo/SentientPhotos generally avoid other dogs for the moment. Good progress had been made by the second visit and Tess was noticeably more affectionate with the owners. So far so good. However, little Tess was described as being “very distracted” when going out for street walks, staring at the door and then either sniffing or pulling when outside. Tess refused food at all times out on walks. The working prognosis thus far was that this was due to her deafness, Tess was now hypervigilant and worried when out on walks. Since she was unwilling to take treats at all when outside the home (even on quiet walks) the behavior consultant was starting to feel rather stuck.

Time to Stop and Reconsider

As a deaf dog specialist trainer, the behavior consultant asked for my input at this stage. What would I do differently? Well, for me when a dog ap-

BARKS from the Guild September 2015