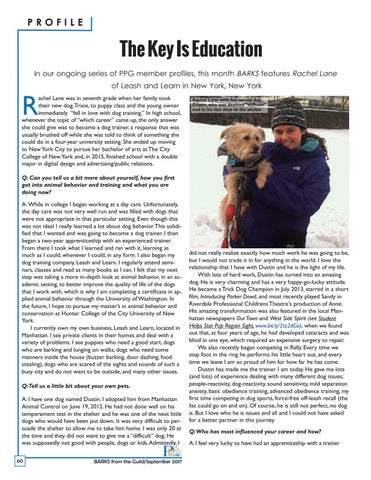 The Key Is Education

of Leash and Learn in New York, New York

achel Lane was in seventh grade when her family took their new dog, Trixie, to puppy class and the young owner immediately “fell in love with dog training.” In high school, whenever the topic of “which career” came up, the only answer she could give was to become a dog trainer, a response that was usually brushed off while she was told to think of something she could do in a four-year university setting. She ended up moving to New York City to pursue her bachelor of arts at The City College of New York and, in 2015, finished school with a double major in digital design and advertising/public relations.

Rachel Lane with her rescue dog Dustin, who was deemed “difficult” and in his last days at the shelter

Q: Can you tell us a bit more about yourself, how you first got into animal behavior and training and what you are doing now?

A: While in college I began working at a day care. Unfortunately, the day care was not very well run and was filled with dogs that were not appropriate in that particular setting. Even though this was not ideal I really learned a lot about dog behavior. This solidified that I wanted and was going to become a dog trainer. I then began a two-year apprenticeship with an experienced trainer. From there I took what I learned and ran with it, learning as much as I could, whenever I could, in any form. I also began my dog training company, Leash and Learn. I regularly attend seminars, classes and read as many books as I can. I felt that my next step was taking a more in-depth look at animal behavior, in an academic setting, to better improve the quality of life of the dogs that I work with, which is why I am completing a certificate in applied animal behavior through the University of Washington. In the future, I hope to pursue my master’s in animal behavior and conservation at Hunter College of the City University of New York. I currently own my own business, Leash and Learn, located in Manhattan. I see private clients in their homes and deal with a variety of problems. I see puppies who need a good start, dogs who are barking and lunging on walks, dogs who need some manners inside the house (buzzer barking, door dashing, food stealing), dogs who are scared of the sights and sounds of such a busy city and do not want to be outside, and many other issues. Q:Tell us a little bit about your own pets.

A: I have one dog named Dustin. I adopted him from Manhattan Animal Control on June 19, 2012. He had not done well on his temperament test in the shelter and he was one of the next little dogs who would have been put down. It was very difficult to persuade the shelter to allow me to take him home. I was only 20 at the time and they did not want to give me a “difficult” dog. He was supposedly not good with people, dogs or kids. Admittedly, I 60

did not really realize exactly how much work he was going to be, but I would not trade it in for anything in the world. I love the relationship that I have with Dustin and he is the light of my life. With lots of hard work, Dustin has turned into an amazing dog. He is very charming and has a very happy-go-lucky attitude. He became a Trick Dog Champion in July 2013, starred in a short film, Introducing Parker Dowd, and most recently played Sandy in Riverdale Professional Childrens Theatre's production of Annie. His amazing transformation was also featured in the local Manhattan newspapers Our Town and West Side Spirit (see Student Helps Star Pup Regain Sight, www.bit.ly/2tz2dGo), when we found out that, at four years of age, he had developed cataracts and was blind in one eye, which required an expensive surgery to repair. We also recently began competing in Rally. Every time we step foot in the ring he performs his little heart out, and every time we leave I am so proud of him for how far he has come. Dustin has made me the trainer I am today. He gave me lots (and lots) of experience dealing with many different dog issues; people-reactivity, dog-reactivity, sound sensitivity, mild separation anxiety, basic obedience training, advanced obedience training, my first time competing in dog sports, force-free off-leash recall (the list could go on and on). Of course, he is still not perfect, no dog is. But I love who he is issues and all and I could not have asked for a better partner in this journey. Q: Who has most influenced your career and how?

A: I feel very lucky to have had an apprenticeship with a trainer

BARKS from the Guild September 2017

BARKS from the Guild September 2017