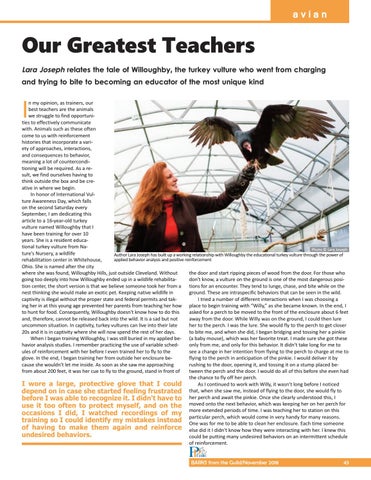 Lara Joseph relates the tale of Willoughby, the turkey vulture who went from charging

n my opinion, as trainers, our best teachers are the animals we struggle to find opportunities to effectively communicate with. Animals such as these often come to us with reinforcement histories that incorporate a variety of approaches, interactions, and consequences to behavior, meaning a lot of counterconditioning will be required. As a result, we find ourselves having to think outside the box and be creative in where we begin. In honor of International Vulture Awareness Day, which falls on the second Saturday every September, I am dedicating this article to a 16-year-old turkey vulture named Willoughby that I have been training for over 10 years. She is a resident educational turkey vulture from NaPhoto © Lara Joseph ture&#39;s Nursery, a wildlife Author Lara Joseph has built up a working relationship with Willoughby the educational turkey vulture through the power of applied behavior analysis and positive reinforcement rehabilitation center in Whitehouse, Ohio. She is named after the city where she was found, Willoughby Hills, just outside Cleveland. Without the door and start ripping pieces of wood from the door. For those who going too deeply into how Willoughby ended up in a wildlife rehabilitadon&#39;t know, a vulture on the ground is one of the most dangerous position center, the short version is that we believe someone took her from a tions for an encounter. They tend to lunge, chase, and bite while on the nest thinking she would make an exotic pet. Keeping native wildlife in ground. These are intraspecific behaviors that can be seen in the wild. captivity is illegal without the proper state and federal permits and takI tried a number of different interactions when I was choosing a ing her in at this young age prevented her parents from teaching her how place to begin training with “Willy,” as she became known. In the end, I to hunt for food. Consequently, Willoughby doesn&#39;t know how to do this asked for a perch to be moved to the front of the enclosure about 6 feet and, therefore, cannot be released back into the wild. It is a sad but not away from the door. While Willy was on the ground, I could then lure uncommon situation. In captivity, turkey vultures can live into their late her to the perch. I was the lure. She would fly to the perch to get closer 20s and it is in captivity where she will now spend the rest of her days. to bite me, and when she did, I began bridging and tossing her a pinkie When I began training Willoughby, I was still buried in my applied be- (a baby mouse), which was her favorite treat. I made sure she got these havior analysis studies. I remember practicing the use of variable schedonly from me, and only for this behavior. It didn&#39;t take long for me to ules of reinforcement with her before I even trained her to fly to the see a change in her intention from flying to the perch to charge at me to glove. In the end, I began training her from outside her enclosure beflying to the perch in anticipation of the pinkie. I would deliver it by cause she wouldn&#39;t let me inside. As soon as she saw me approaching rushing to the door, opening it, and tossing it on a stump placed befrom about 200 feet, it was her cue to fly to the ground, stand in front of tween the perch and the door. I would do all of this before she even had the chance to fly off her perch. As I continued to work with Willy, it wasn’t long before I noticed I wore a large, protective glove that I could depend on in case she started feeling frustrated that, when she saw me, instead of flying to the door, she would fly to before I was able to recognize it. I didn&#39;t have to her perch and await the pinkie. Once she clearly understood this, I use it too often to protect myself, and on the moved onto the next behavior, which was keeping her on her perch for occasions I did, I watched recordings of my more extended periods of time. I was teaching her to station on this particular perch, which would come in very handy for many reasons. training so I could identify my mistakes instead One was for me to be able to clean her enclosure. Each time someone of having to make them again and reinforce else did it I didn&#39;t know how they were interacting with her. I knew this undesired behaviors. could be putting many undesired behaviors on an intermittent schedule of reinforcement. BARKS from the Guild/November 2018