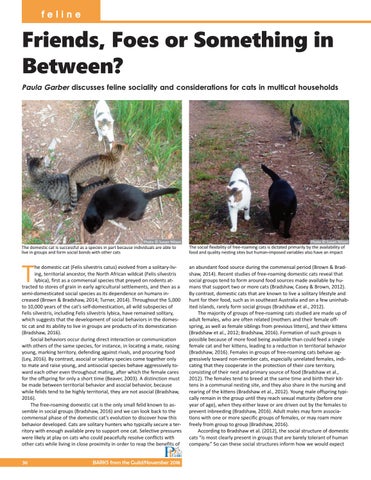 Friends, Foes or Something in Between?

he domestic cat (Felis silvestris catus) evolved from a solitary-living, territorial ancestor, the North African wildcat (Felis silvestris lybica), first as a commensal species that preyed on rodents attracted to stores of grain in early agricultural settlements, and then as a semi-domesticated social species as its dependence on humans increased (Brown &amp; Bradshaw, 2014; Turner, 2014). Throughout the 5,000 to 10,000 years of the cat’s self-domestication, all wild subspecies of Felis silvestris, including Felis silvestris lybica, have remained solitary, which suggests that the development of social behaviors in the domestic cat and its ability to live in groups are products of its domestication (Bradshaw, 2016). Social behaviors occur during direct interaction or communication with others of the same species, for instance, in locating a mate, raising young, marking territory, defending against rivals, and procuring food (Ley, 2016). By contrast, asocial or solitary species come together only to mate and raise young, and antisocial species behave aggressively toward each other even throughout mating, after which the female cares for the offspring for only a short time (Beaver, 2003). A distinction must be made between territorial behavior and asocial behavior, because while felids tend to be highly territorial, they are not asocial (Bradshaw, 2016). The free-roaming domestic cat is the only small felid known to assemble in social groups (Bradshaw, 2016) and we can look back to the commensal phase of the domestic cat’s evolution to discover how this behavior developed. Cats are solitary hunters who typically secure a territory with enough available prey to support one cat. Selective pressures were likely at play on cats who could peacefully resolve conflicts with other cats while living in close proximity in order to reap the benefits of

an abundant food source during the commensal period (Brown &amp; Bradshaw, 2014). Recent studies of free-roaming domestic cats reveal that social groups tend to form around food sources made available by humans that support two or more cats (Bradshaw, Casey &amp; Brown, 2012). By contrast, domestic cats that are known to live a solitary lifestyle and hunt for their food, such as in southeast Australia and on a few uninhabited islands, rarely form social groups (Bradshaw et al., 2012). The majority of groups of free-roaming cats studied are made up of adult females, who are often related (mothers and their female offspring, as well as female siblings from previous litters), and their kittens (Bradshaw et al., 2012; Bradshaw, 2016). Formation of such groups is possible because of more food being available than could feed a single female cat and her kittens, leading to a reduction in territorial behavior (Bradshaw, 2016). Females in groups of free-roaming cats behave aggressively toward non-member cats, especially unrelated females, indicating that they cooperate in the protection of their core territory, consisting of their nest and primary source of food (Bradshaw et al., 2012). The females tend to breed at the same time and birth their kittens in a communal nesting site, and they also share in the nursing and rearing of the kittens (Bradshaw et al., 2012). Young male offspring typically remain in the group until they reach sexual maturity (before one year of age), when they either leave or are driven out by the females to prevent inbreeding (Bradshaw, 2016). Adult males may form associations with one or more specific groups of females, or may roam more freely from group to group (Bradshaw, 2016). According to Bradshaw et al. (2012), the social structure of domestic cats “is most clearly present in groups that are barely tolerant of human company.” So can these social structures inform how we would expect